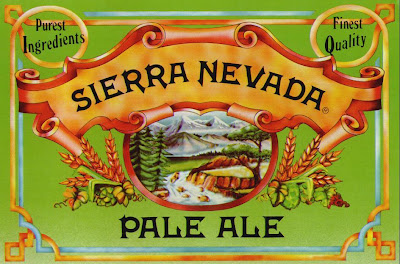 It had to happen sooner or later and it seems as though tonight will be the night.

It was about three years ago now when I first became aware of Sierra Nevada Pale Ale and its importance to the Australian craft brewing scene. Through my interest in better beer, I read and researched and delved into any book or article I could find and this beer just seemed to keep popping up in dispatches. I had to know more.

So many Australian craft brewers were nominating this beer as the one which sang to them and made them realise what it was about beer they were chasing. For many it was the impetus for moving forward and actually establishing their own microbrewery while it gave others the courage to create a beer with character and balance and interest.

My quest for this Holy Grail of Beer was complicated and long. Which, while annoying at the time, has made the journey more enjoyable, the challenge more worthy. I had tracked down a place which supplied it to find out they had sold out. I had orders that fell through. I had so-called ‘mates’ who bought one at The Local Taphouse after an Ale Stars night when I was driving and they knew I wouldn’t be able to partake (BASTARDS!!) It was just one coincidence after another.

Friends and beer-mates and fellow bloggers weighed in suggesting that I should/shouldn’t get my hopes up, that the beer was/wasn’t worth chasing and that I just HAD TO/DIDN”T HAVE TO try it for myself. To this point I had READ about it, I had SEEN it. I had SMELLED it and then, early last year I got to TOUCH it. Because I bought some! Then I received some for Christmas, a day or two after I had bought myself a six pack of the Pale Ale, Torpedo IPA and the 2009 Anniversary Ale Double IPA.

And tonight, at Ale Stars at The Local Taphouse where APAs are on show, we will be treated to the mysteries of Sierra Nevada Pale Ale – well, a mystery to those of us still waiting to be entranced. Like me.

I’ll let you know how I go!

Ale Stars kicks off at 7ish at The Local Taphouse. $30 gets you four beers and some sensational pizza to soak it all up.
Posted by Beer Blokes at 10:18

I eagerly await the report!

Sierra Nevada Pale Ale and Chicken Super Burritos in The Mission SanFran, awesome combination! Hey couldnt find your email guys : I have a leading boutique who u have in your blogroll who want to send u samples + voucher of a new Munich Lager.. If interested! My email is redbarren at gmail dot com or via benbarren.com or @benbarren on twitter ! Thx. BB