Ale Stars - A quiet night out 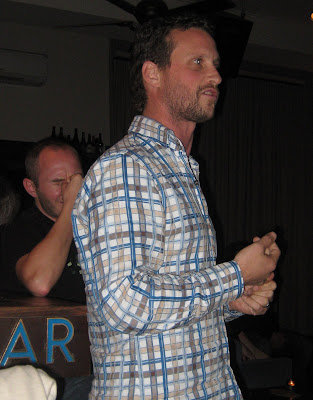 What a difference a month makes. This time in April I wrote about how the Ale Stars meeting at The Local Taphouse was a noisy, beery vibrant and beery affair due to the venue being as full as a fat lady’s sock with people enjoying fine beers, loud beery banter and the thoughts of legendary guest brewer, Brad Rogers.

If that one was a bit like a cousin’s 21st birthday party, then last nights’ was more of a dinner at Mum’s with the whole family seated around the dining room table. Last month’s meet had a real atmosphere, a buzz about it with even low-level conversations creating a constant low murmur through the room and affable host Shandy struggling to keep the hosting audible. Friends moved between groups to chat and guest brewer Brad had to drink about thirty beers while talking to interested punters after the meeting.

Last night things were at the other end of the scale. The 50 turned into 20 and the mood was mellow, relaxed and intimate. A few new faces complimented the clutch of regulars and we even had an ‘industry insider’ join us for the beer and fun. Tom (hope I spelled that right) has been involved with the Mountain Goat crew for some time and it was good to have his knowledge thrown in to the conversation when things got technical. Any truth to the rumour that he was also heard calling The Goat Guys on his mobile to let them know how good this Ale Stars thing is?! Could he have been teeing-up a guest brewer for the next session featuring a Goat beer?

Also unusual about last night was the fact that the theme was Strong Ales and many of the offerings were new to the gathered Ale Stars. A Greene King Strong Suffolk Ale began proceedings and was a terrific starter for those new to this type. Warm, ruby-red and yet very easy drinking, this is a beer made from a 2 to 5 year oak stored batch which is then blended with new beer to create a traditionally brewed 6% ale.

The Emerson’s Old 95 lifted the alcohol volume up to 7% with a beer made using a complex grain bill and modern methods to replicate the barrel ageing original process. Interestingly, while the GK had an aroma suggestive of a big gutsy taste but a flavour that was more subdued, the Emerson was the reverse with the mellow nose masking a somewhat hop-driven full mouthfeel and slightly ‘sharp’ alcohol edges. And don’t ring the tech-foul bell; I didn’t use words like diacetyl, mono-sacchyrides or ‘Calvados-y’.

Recent award winning West Australian brewery, Feral, provided the next offering in the form of an 11% Barley Wine called, quite appropriately, Razorback. The keg from which we drank had been stored by the Local Taphouse guys for months, kept maturing for this very occasion. Guy also told us how a similar process had been put in place at the Sydney venue with a single Razorback keg being set aside from the rest for some in-house ageing. Apparently everybody knew about this ‘resting keg’ – everybody, that is, except for the beerline technician who hooked it up to test the system before the grand opening. Justin and Guy (as they describe it) were then ‘forced’ to drink it as knock off beers while preparing for the venue launch. Could this solve the mystery of why the venue opened some months later than expected?!? And they blamed council and tradesmen!

The Feral Razorback went down OK but was probably the only beer of the night that divided opinion to any extent. Robust and forthright, the body was certainly full enough to carry the flavours but perhaps the alcohol was more prominent than the previous samples. Simon “Lucky” was the only one who struggled to put his away, but this may have something to do with the fact that he had chosen this beer as his ‘starter’ before the night began! Good choice!

We had begun with a British offering, moved through New Zealand and back to Australia and we were to finish in the U.S. with a Rogue XS Imperial Red. We also dropped back to a 9% beer with this one, but you wouldn’t have guessed by observing the faces of those as they first sipped this big, bold Yank drop. Packed to the hilt with malt and hops and yeast and some secret ingredient which could have been wrung from the sweat towel of a steroid-laden brewer – in a nice way – this was a cracker to finish with. Most of us were already ’finished’ before this point!

The style of beers we dank may also be a contributing factor in the night’s only ‘downside’. Shandy had promised us an easy set of trivia questions (yet another fascist attempt to knobble the favourites!!) promising to bring the competition closer. Well, he did that, and then some. Of the 15 questions answered by the five teams, giving a total of 75 questions, as a group we managed to get less than half correct!! So close was the result that 1team scored just 6 points – and the remaining four teams managed just 7 points each creating a 4-way tie broken by the drawing of straws!! I blame the Strong Ales. And Shandy.

So, while markedly different in style to the previous session, this instalment of Ale Stars was no less enjoyable and certainly more homely. As Guy and Justin and I discussed later (over a beer, funnily enough) the numbers don’t matter as much as the people who make it up. Big is great and small is great and neither is necessarily better than the other. As long as there is beer.

And, for the wags among our readers, see if you can come up with a caption to the photo of Shandy listening to Guy do the Ale Stars welcome. Neatest funniest entry wins a Beer Blokes admiration pack comprising a 'Virtual Pat-On-The-Back', and the satisfaction of a job well done.
Posted by Beer Blokes at 11:12

As much as i'd love to provide you with a caption for the photo Prof. I think i've won enough competitions this week already ... if you know what I mean?

Now now Reeksy, if we're going to count drawing straws as 'winning' well ... hang on ... I would have,so fair enough!!

see what happens when I leave the country?!!!

Thanks for the link Gemma,

I can't remember how many beers you said ... strong ales, vintage ales, barley wine ... not really recommended by the people at Mega Memory!

Briony, you little boy-chasing-overseas-vixen! Missed you!