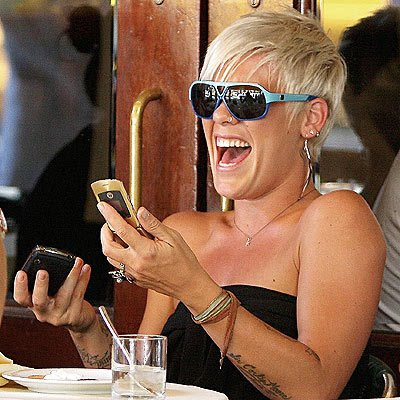 Rock chick Pink is over here in Australia at the moment presenting 768 sold out concerts – or something - and is getting plenty of publicity. From turning up at hospital children’s wards and various charity events to appearances on every channel every night, the girl is working hard for her money.

One thing I didn’t know about Pink (apart from her real name, where she got her start, any of her songs ...) was that she was a beer drinker. And guess what? I have Twatter to thank for that! Indirectly, of course, I don’t do Twatter as you know. No, I found out through a little piece in the gossip-y section of the paper yesterday. Which I also don’t usually read. But the heading caught my eagle-eye; ‘TOOHEY’S “PHOOEY” – PINK’

Turns out that during her tour Pink has been “expanding her knowledge of Australian beer”. The singer tweeterered on her Twatter site that she; “had briefly ventuered away from her favourite brew, VB”

“OK so I tried the Toohey’s beer. Like VB better,” she wrote.

That’s a bit like saying that a child has ‘expanded his knowledge of advanced mathematics because he can now count to two’. But I don’t want you to get the impression that Pink is a one dimensional drinker. She has also shared her love of Australian wine;

Lovely? Lovely??! That stuff is a very sought after and limited edition beauty not too many rungs below a Penfold’s Grange and varies between $600 and $800 a bottle for the 94. I hope her legions of fans didn’t head straight down to the drive through bottleshop at the local pub and ask for a six-pack!