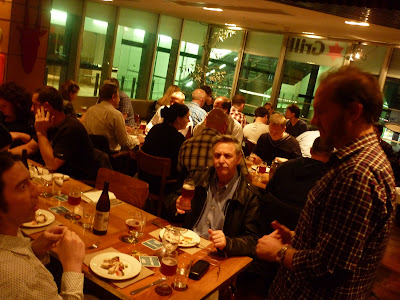 A big beer week for Beer Blokes last week and the highlight was the Mountain Goat Beer Dinner at Beer Deluxe.

Beer Deluxe has already established its credentials as a proper beer venue for many years with the focus on its tap list and an uncanny knack of attracting special, rare and other limited release beers through strong and loyal relationships with Australia’s favourite craft brewers.

Its bottle list has also developed a keen following in recent times and the outdoor area and cider garden have been a ‘go-to’ destination for casual catch ups while the downstairs space has been the podium for beer launches and other special events. But the restaurant/grill upstairs has always been something of an undiscovered gem.

On Thursday that changed when Melbourne’s favourite craft brewery, Mountain Goat, teamed up with the very talented kitchen crew and Prof Pilsner to unofficially ‘cut the ribbon’ on the Beer Deluxe Grill by treating an appreciative crowd to the first of what will be many regular food and beer events.

Mountain Goat co-founder and Executive (I don’t have to clean out the Mash Tun no more) Brewer Dave Bonighton and popular Road Goat, Tom Delmont were on hand to share the Goat Story as well as a representative selection of the fruits of the brewer’s craft. The beers were matched brilliantly with a series of dishes, each attempting to – and succeeding in – outdoing the last.

Dessert was a tasting plate of three different delights from fresh, tart berries to chilli-laced mousse which was paired with some carefully cellared Surefoot Stout. This alone would have been a finish befitting the tone of the night. But, in a taste of things to come, the expectant guests soon discovered that when you commit to a Beer Dinner at Beer Deluxe hosted by Prof Pilsner, well, expect the unexpected!

As the room hushed and the lights dimmed, Dave produced a carefully sealed carton from the vault and, in an unveiling ceremony of which Steve Jobs or Bill Gates would be proud, withdrew freshly filled bottles of Mountain Goat’s collaborative brew, The Thorny Goat Black IPA. Brewed with Aussie ex-pat and Production Manager at Thornbridge (UK) Caolan Vaughan, The Thorny Goat is not just Australia’s first international collaborative brew – it’s an absolute cracker.

By Dave’s own admission the beer is “only just old enough to be out at night on its own” and the decision to bottle and present it on Thursday night was made at about four o’clock on the same day and so some more time will see it present at its very best. Punters can expect to see it in bottles in about two weeks but the lucky ones at Beer Deluxe were treated to something very special as it really ‘sang’ with the dessert tasting plate. 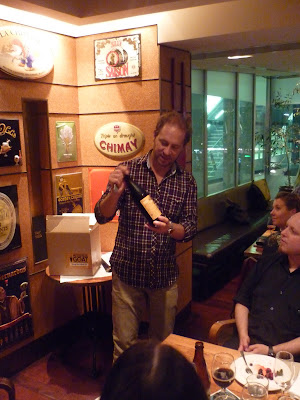 The chilli-choc mousse provided the perfect foil for the hoppy charms of the Thorny Goat while the hints of roasty bitterness in the end palate gave the mousse some nice complimentary melody. Even the plate garnish of candied acidulated malt grains provided a taste of what might be to come for future beer dinners in the Beer Deluxe Grill.

It’s not for me to say here, but apparently the guests all spoke very highly of the evening as a whole and felt that the night was something just a little bit special. With some witty banter, Q & A with the brewers a little beer trivia and perhaps a couple of well-timed ‘Dad Gags’, it seems that a ripping night is guaranteed for those who book for future events.

The crew at Beer Deluxe, ably led by Barney Matthews and managed adeptly by Siobhan and Sam out front and Quentin in the kitchen have the dedication to their jobs to ensure that these nights are run smoothly and with an effortless efficiency. The food and beer matches are more than mere good luck and with details like Evan’s Goat Art in Hops and Malt (see picture) it would seem that early bookings for coming Beer Dinners would be advisable. 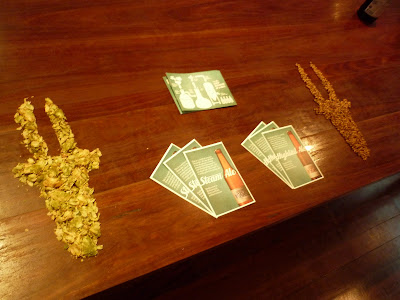 And, with brewers and their staff willing to support these events and the talents of the kitchen harnessed it looks likely that Beer Deluxe will take the next step in its development and establish itself as a Beer & Food destination for Melbourne’s ever growing beer crowd.

The next Beer Deluxe Beer Dinner is High Country in the Big Smoke which is an all-round sensory spectacular featuring Bridge Road Brewers beers for your mouth, Simone’s of Bright menu for your tum and Blank Vault Productions musical treats for your ears as well as the official launch of Ben Kraus’ very special 2011 Hop Harvest Ale. Tables are very limited and, if you haven’t gathered by now, I’d book quickly if I were you. Thursday April 14, $85 per head all inclusive and a 6.30pm start.

PS A big shout-out to the guys and girls from Beer Deluxe who worked so well to make the night a success. To Sam and Siobhan, Evan, James & Gene and to Quentin and his kitchen crew; well done!

PSS An equally large thank you to all those who booked and came along to support this event – from my very own Ale Stars and friends to the secretly booked brewers and the many local beer lovers who took a bit of chance on the unknown.