Why we do what we do ...or, Beer Dinner at The Plough with Sam and the Sparrows 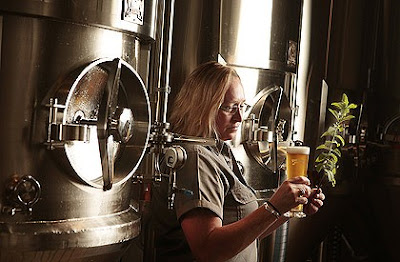 (Photo Eddie Jim from The Age)

There really is something to be said for the old adage that work is something you do when you’d rather be doing something else. Or something like that. However the saying goes it holds equally true that if you get to ‘work’ at something you really enjoy, you don’t question why it is – you just embrace it.

This version of ‘livin’ the dream’ was displayed by a handful of friends gathered around a table in a corner of an otherwise empty country pub about an hour out of Melbourne in the middle of last week. We had just shared the joys of a Beer Blokes Beer Dinner at The Plough where five very different beers had been craftily paired with five delicious courses, a tie-breaking trivia challenge, more than a little jolly banter and the addition of a very special guest.

Sam Fuss has been in the brewing caper for eleven years now (as those who had listened to her Radio Brews News podcast debut the previous week would already have known) and it seemed that her name had been mentioned more than once during the six previous dinners the Plough and Chef Mark Mills has held. So it was no surprise to see her warmly welcomed and made to feel well at home with a comfy couch by the fire and a chilled glass of amber happiness in hand by the time we were ready to roll.

Perhaps the fact that she came bearing a keg of her Red Truck Marzen explained the depth of the welcome? Sam regaled the 80-odd guests with tales of time spent with Little Creatures and Matilda Bay, of doorless delivery trucks and experimentation with ingredients like mint and cherry and coconut. All I can say is that her hand must have finished sore, so many vigorous handshakes was she subjected to as the guests left.

And here’s the point of the post. Sitting around over the last of the Red Truck – and perhaps a bottle or three of fine Australian red wine – it became apparent to me that doing what you love doing is the name of the game. Plough owner and Chef Mark Mills made the lifestyle decision to leave the hustle n’ bustle and head for the hills and plains of Myrniong, a shift that has been beneficial for his young family and for the locals as well.

Sam is the same. She is someone who is perfectly suited to talking about the passion required to make good beer and to watch her engage with the punters one-on-one is to watch someone doing just exactly what they love doing – and doing it well. There is so much of her own personality and style in her beers and in the way she approaches the challenges of brewing and you can’t help thinking that she moves a fair bit of beer just because she is able to instantly make friends. She will be the first to admit that she often has to stop and pinch herself that she actually gets paid to do all this.

Her travelling companion for the night, True South Events Manager Tanya Harrowell, was there to keep Sam company (but I have to secretly suspect she was there to see just how a beer tasting/food matching event is run by a seasoned professional). Having said that, spending some quality time with Tan made me realise a couple of things. One; True South is a definite ‘Go To’ destination for the whole hospitality and beer experience and has some pretty cluey staff on board and, two; Sam is a pretty darn good person to work with!

As to the title of the post? Let’s just say that “what happens at Beer Dinner, stays at Beer Dinner” and after a couple of late nights in Sydney, a delayed return flight and a peak-hour drive which got me to Myrniong just in time to take the mic and welcome the guests, a 4.30am finish was perhaps not what the doctor ordered.

(Photo from The Weekly Times)

But for people like Tan, Sam and Mark – I’ll always make an exception.

The next Beer Dinner at The Plough Inn in Myrniong is one well worth setting time aside for. In an attempt to do a sort “Best of the Best” guests will be given two things – a scorecard and twenty beers. We will gather together as many of the beers as we have showcased over the last year and serve them one after the other with plenty of delicious finger food in order to find the People’s Choice Top 5 Beers.

Wednesday November 23rd will see beers from around the globe, around the country and around the corner go head-to-head to see what all this beer thing fuss is about. Call Mark at The Plough to book - Phone: 03 5368 7173

Oh and Sam and Tan – can’t wait to do it all again!