It’s going to be a big week

As I sit at here right now I am in that place where every sports fan dreams of being. It is Grand Final day – the Premiership, The Big Show, the place where legends are born, heroes are made and where ‘Winners are Grinners and a Shit Sandwich for second’ – the last day of the season in my hometown’s sport of choice, the AFL. And my Hawks are there, challenging for football’s ultimate prize. And that’s all for clichés and catch-phases, I promise. (Well, might sneak one more in later).

The Hawthorn football club is a proud and humble club, admitted to the Victorian Football League in 1925 and starved of success for nearly 40 years before unleashing an era of dominance which realised 9 Premierships between 1961 and 1991. They have failed to reach the big stage since that last flag. Until today.

A young squad boasting equal parts grit and flair, the young Hawks of 08 are poised to write their names in the history books along side those of the players who they watched as kids. Blokes who will play today were not out of nappies when the last champion Hawthorn teams were breaking records for consecutive Grand Final appearances, for record breaking winning margins and for breaking opposition hearts, spirits and bones in the Hawks golden heyday of the late 80’s. 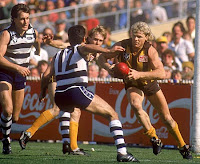 I will watch the boys today and feel proud to be a supporter of the Brown and Gold and know that, win or lose, I can be pleased with the year that they have delivered to their loyal fans. I will watch the game and hope that they win, but not be disappointed if they give their best and fall short. I will still support them in defeat and will graciously give congratulations to the Geelong Cats if they are to walk away as winners.

But what I won’t do is have a beer. Or ten! Can you believe that shit!?! I am ‘on call’ this week for the State Emergency Service and, while on nearly any other week I could get someone to cover for me, Grand Final day is a different beast altogether. It is also a day where, sadly someone somewhere usually decides it’s OK to drive the car home after a skin full of Carlton Draught and wraps themselves around a tree or a pole and we have to cut them out. They are usually considerate enough not to do this during the game, so I hope to be able to watch from start to finish.

Must go, the pre game ‘entertainment’ is winding up and the boys will be running out shortly. With luck and skill the Hawks will prevail and on Monday night after ‘handover’ I can raid the fridge and crack a nice cold ‘something special’. Win, lose or draw.

Then, next week, I will do it all again as my NRL team, the Melbourne Storm last night booked themselves a spot in their third consecutive Grand Final decider in Sydney next Sunday. I will have more tales to tell and more beers to share with mates. Look out!

P.S I am just taking it one week at a time at the moment.
Posted by Beer Blokes at 14:13