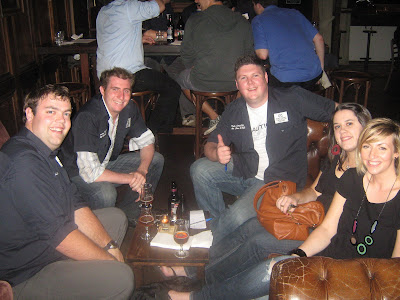 It seems as though Ale Stars at The Local Taphouse has taken the next step. The participants look at each other, well, differently now. Not in a creepy or dicky ‘Brady Bunch Opening Credits’ sort of way but just, you know, differently?

Maybe it has something to do with the fact that so many regulars return each month that we just recognise more faces and have a closer friendship with each other, or that because we have an Ale Stars shirt the place just looks different, or that the anticipation of good beer just makes people smile more? Not sure, but it makes for a very pleasant environment in which to drink beer.

A seemingly smallish crowd of 35 or so made the noise of dozens more giving further credibility to the assertions I made above and Shandy had his work cut out for him to pretend to keep order. Maybe because, as a group, we are better edu-macated in the mysterious ways of beer, we have begun to chat more about the beers? The selection this time around certainly made for plenty of comment.

A brief history of the India Pale Ale style was followed up by a Fuller’s IPA. Sweetish biscuity malt aroma and a nice earthy hop flavour gave us a good start to this style with a good example of the English IPA. Sweeter smelling than the taste let on.

An Emerson 1812 IPA followed and this one turned the tables on the first beer. A much more prominent hop aroma told one story while the taste revealed a smoother, sweeter finish which was almost hop-less. The New Zealand take on the style provided a beer for quaffing although there was a feeling that the assertiveness had mellowed since previous brews due to an unavailability of the right hops.

The next beer fell somewhere in the region of an American take on an English style with an Australian craft brewer’s spin on the style. Murray’s Icon 2IPA at 7.5% raised the bar on the previous 5 percenters but left no doubt as to the validity of this beer’s claims as an IPA. Nice tight head, big floral aroma, citrusy hop flavours woven into a well constructed biscuit malt base and just the right carbonation to knit it all together. It tasted nice, too.

Gouden Carolus Hopsinjoor finished the official portion of the night with a Belgian interpretation of an IPA and this one left no one in any doubt as to the Belgians ability to produce something very special. At 8% it should perhaps have been a harder task, yet this one slid down like a Liberal leader’s popularity. A head that The Elephant Man would be proud of, spicy hop aroma and bready grain malt sweetness – this beer had more interest than a Cash Converters loan. The overall impression was refreshing and drinkable while the individual elements seemed to pop in to surprise with each fresh sip. 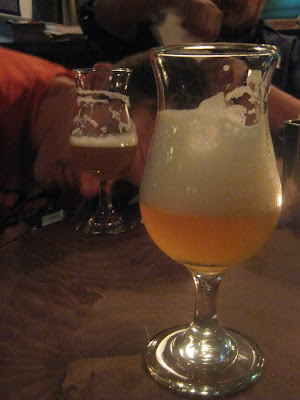 The trivia was, as usual, enjoyed by all, disputed by many and thrown together at the last minute. A good mix of general beer knowledge, technical bits and current beer events made for a close contest. So close, in fact, that even a countback couldn’t split the two winning teams. Suggestions for a tie-breaker included everything from a taste-test to a game of Malt/Hops/Yeast (based on Rock/Paper/Scissors) and from a Guess That Beer to a Cage Match to the Death. A tie-breaker question was reluctantly produced to break the deadlock.

The night finished – as it always does – with Ale Stars fronting the bar, buying each other beers and, eventually, holding each other up or dragging one another out the door. G’Day Simon! And this is where Ale Stars is getting more and more enjoyable. The ‘Afters’ is becoming a session in itself with groups relaxing and catching up and talking crap and sharing thoughts and lamenting the fact that it will be a month before we get to do it all again.

As I headed out the door and realised there were still plenty of Ale Stars scattered around the room it occurred to me that the month might just fly past pretty quick. And, if my crew can’t make it again next month and keep using poor excuses like “I’m in Albury/ Healesville/ Canada” and I have to drive, then I might take up Jo and Bran’s offer of a spot on their couch.

great report Prof but, alas, no mention of the most important moment of the night - when Anton came up with the (current) winning handshake!!

It'll be a big one next month Prof! Very much looking forward to it :)

Haven't forgotten - unlike Shandy who forgot to get the People's Vote on the nights' beers - the 'Ale Stars Handshake' is getting a post of its own! Low light means it's a bit grainy, so I'll need to doctor it up a bit first!

Looking forward to catching up - Gemma has copied me in on your itinery and I'll see if I can gate-crash a few of your engagements!

Our couch is open for you to crash anytime Prof! And I'll be back in the country for next months ale stars. It'll be massive. - Bran -