How To Turn Wine into Beer 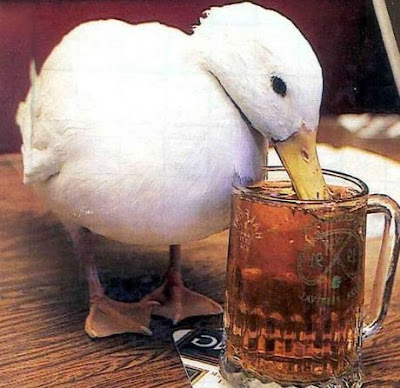 The Courthouse Restaurant in Berwick is a grand old building with plenty of character (even when I’m not in the house!) – just ask Kelv. It is therefore well suited to special occasion dinners, which we like to host every month.

Last week we went with a Duck & Pinot dinner for the first time. An ambitious project but one we managed to pull off with ease. If you don’t mind me boasting just a bit. Four dishes featuring duck in various forms matched masterfully with four different Pinot Noirs – two from Tasmania plus a New Zealand offering and a youthful French to finish.

Now, I hear you all saying; “Professor, a post about WINE, have you gone completely mad?!?”

Well, no, thank you for asking. And I’ll explain in a moment if you’ll let me finish.

A few of our guests had been to a couple of our previous Beer Dinners and were keen to see if my hosting of this event included any of the Wine-Wanker bagging that seems to feature a little bit in the hosting of my preferred gigs. I did not disappoint – although, I only really made comparisons between food and wine and food and beer matching. These matches were fine and enjoyed by all, but it wasn’t until the night ‘wound down’ that we really began to kick into gear.

Rod and Barb are some of my favourite Beer People and are in regularly. They are more than willing to take a chance on a new beer and are even more willing to trust my judgement as to what they might like. After a couple of hours of duck soup, duck rillettes shepherd’s pie and confit duck main with a cheese board to follow, they and their daughter Ashley and partner Scott were right up for some beer chasers. And chase we did.

And what better way to turn a Duck Dinner into a Beer Dinner than with some ‘matching’ beers. That is, beers matched to ducks. On a recent trip to Mansfield we stopped in at Jamieson Brewery and I think I saw a duck on the river so we kicked off with a Jamieson Pale Ale. Crows sort of look a bit like ducks so I followed that up with a 3 Ravens 55 APA.

I was beginning to struggle a bit at this point, but then inspiration hit me. A Scottish Elderberry Ale! How’s that I hear you ask? Well, I remembered a conversation that I had with Shandy and in his broad Scot’s accent I heard him describe an ale as dark as this. Only it came out ‘duck’. Brilliant. I was right out of ideas at that point and finished the night with the only beer that I had left.

FYI - Any post with a picture of a duck drinking beer deserves a round of applause. I posted a link to this on my Twitter account a couple of days ago in appreciation. LOVE IT.

Though I should point out that this pic was lifted shamelessly from The Wide Wide World of Webs and was not one of the aforementioned creatures featured on the menu!