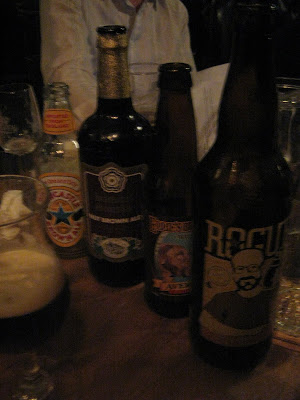 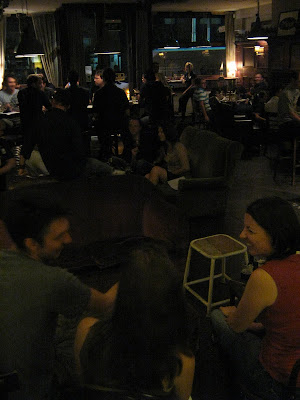 Each week there seems to be a couple – maybe five – new faces joining the ever growing crowd of regulars and each week a couple of new faces from the last months’ session are returning, making Ale Stars a rather large ‘family’. I can only speak for me, but Ale Stars family functions are considerably more fun than ‘real’ family get-togethers. There’s certainly more and better beer. 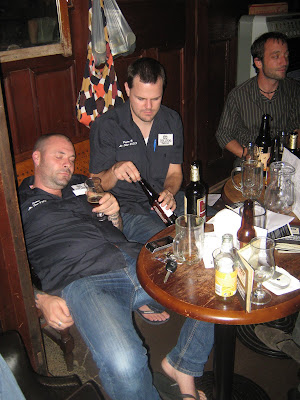 Brown Ales may not be the most exciting or beer-sexy style going around, nor are there too many varying interpretations but this didn’t stop a big turn-out which included around nine first-timers. Newkie Brown proved a bit of a hit with both those who had never tried it before and those who had forgotten it while the Samuel Smith’s Old Brewery Brown Ale took the flavour level up a notch.

The American craft brewers are beginning to discover beers that haven’t been hopped to within an inch of their lives and the Ellie’s Brown Ale from Avery Brewing Company in Colorado was a nice interpretation of the style with the added joys of some caramel and chocolate notes as well as a hefty dash of hop flavour to boot. A quick shout out to Beer Masons who provided this beer.

To get an even more ‘American’ take on the style we were treated to a Rogue’s Hazelnut Brown Nectar. The hops are turned down a bit more in this one but the flavour profile is cranked up with the addition of hazelnut essence which, combined with the big cakey malt backbone, makes a cracking dessert beer of cake-like proportions.

Another session packed with warmth and friendship and ... what’s that big cheesy word? ... mmmm ... oh, I remember – conviviality! But that’s kind of to be expected now as the family grows and yet it becomes smaller at the same time. It has become such an important part of my social calendar that I reckon you could almost run the night and forget to serve the beers and everyone would still have a great time. Almost.

After all, we could always just get more ‘betweenies’.

This month my own position as ‘The Person Who Has To Travel The Furtherest to Get There’ was bettered by a young Beer Belle who not only travelled from GEELONG, but travelled by TRAIN. Chatting to her I felt positively local. She is one of what I will dub ‘Dave’s Crew on The Comfy Couches’ and for those playing along at home they were sitting one-in from ‘The High Table’ which in turn is one-over from ‘The Little High Table’ which is opposite ‘The Fireside Lounge’ next to ‘The Front Window’ which abuts ‘The Side Bar Seats You Have To Sit At If You Come In Late Unless There Is A Guest Brewer Then You Can’t Sit There’ which overlooks ‘The Stage’ and ‘The Other Comfy Couches’ – you know where I mean? 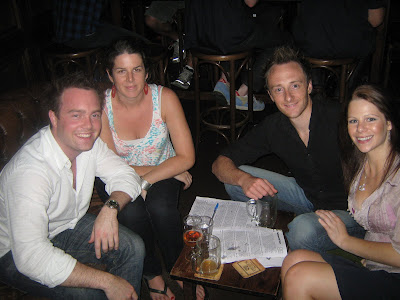 Love the wrap Prof! And I loved seeing some new faces in there too - loved their trivia efforts. Can hardly wait for the next Feral session.

We probably should clarify that last bit - the "Feral session" refers to the impending visit by Brendan Varis from Feral Brewing. Although, if all the regulars turn up and the beers go down like they did at the Bock session, it could well get a bit 'feral'!

Was kinda hoping to leave it ambiguous but probably best you cleared it up ;-)

Yeah, have another look at the pic of Simon C in all his glory and tell me we need more 'feral' in the joint!

I've got my money on the Feral Ale Stars being the biggest yet.
And if Boris or Razor make an appearance then yes, it might get a bit feral.

We've created a monster. I love it. Some new ideas for elements to the evening coming too.