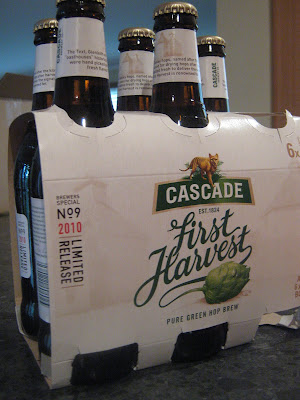 On a recent holiday with the family to Tasmania we spent a bit of time at the Cascade Brewery Visitors Centre. Given that our accommodation was a mere ten minute walk down the hill to the brewery and a rather more taxing thirty minute walk back up the hill from the brewery that’s not surprising.

What did surprise me, however, was the unexpected deflation I felt when I asked the young girl looking after us if the Cascade First Harvest Ale was available yet. Her almost apologetic “No, sorry, not until May 3rd I’m afraid” was received with all the boyish disappointment that used to accompany the realisation that the season’s first Scanlen’s Footy Cards had not yet been delivered to the Milk Bar.

So why get all bent out of shape over a beer? I have always maintained that it is just as much a Beer Sin to be a Beer Snob as it is to be a Beer Yob so I can’t really carry on now, can I? It then dawned on me that what Cascade has done for the beer scene is to produce a beer that has all the trademarks of a ‘crafted’ beer but without the hoopla and manufactured expectation that might accompany the release of the latest “extreme beer” in the US. and is also kept accessible to the average drinker locally.

Rather than just throw a gimmick into the marketplace or attempt to generate false anticipation, it merely creates a decent product with all the trademarks of a proper beer and then stamps credibility all over it by dipping it liberally in that magical factor called – provenance. What that means to the discerning punter is that the malt is not just Tasmanian but malted at Cascade, the hops are from the nearby Bushy Park Hop estate and the water runs down the side of Mt Wellington and into the brewery at its feet. That’s provenance.

This year welcomes the ninth version of this single batch, limited release green-hopped brew. As many wet (fresh and undried) hops as are picked are added as quick as the truck can take them and the total quantity of hops determines the batch size. The hops, all as yet unavailable and experimental varieties, were picked on March 3rd and went straight into the kettle.

Last years’ Cascade First Harvest Ale employed hops whose names paid tribute to three pioneers of the Tasmanian hop industry and this year that theme is continued with hops named after the kilns, or oast houses, that those fine folk may just have used. For those out there who may require the answers (should they be attending a trivia night soon) they are;

Text – an aroma hop named for the octagonal kiln which still sits in the grounds of Bushy Park,
Glenlieth – the bittering hop whose weatherboard kiln is situated at the nearby town of Plenty and,
Oakley – for flavour – and named after a small humble family kiln.

The Text kiln was also at one time used as a church for Sunday services which further establishes the quote attributed to Benjamin Franklin that “beer is proof that God loves us and wants us to be happy”. Hmm, good name for a show, that.

The malt backbone is a little sterner this year with the inclusion of some dark malts which provide a rich hue and enough sweetness to balance the generous notes provided by the hops. There are three distinct ‘levels’ to this beer with an initial toffee-ish malt starter and a crisp almost clanging bitter finish which stays a good while and leaves politely. In between is a little package of tangy little bangs which I can’t yet identify. Maybe the rest of the six-pack will reveal the secret to me.

I have included a link to last year’s post on Cascade First Harvest Number 8 and, while I enjoyed that one, I think this new installment takes the overall flavour, balance and fullness to a better conclusion. Maybe it’s because I’m drinking this one about as fresh as I can get it – it just feels better.

I’m glad Cascade makes this First Harvest Ale. I like that a brewery that is seen as more ‘mainstream’ than ‘craft’ can produce good quality inexpensive beer for the average punter but can also honour its own heritage with a beer that is well crafted, full of interest and flavour – and is limited in its release so that its arrival is anticipated and welcomed, without causing too much fuss.

Cascade First Harvest Ale 2010 will be available from Monday May 3rd. Expect to fork out about $24 for a six pack. Do what I do – buy a couple of tasters and then, if you like it, go back and snag a slab.
Posted by Beer Blokes at 21:43

Lovely stuff! Roll on May 3rd!

A couple of years ago I had the chance to try First Harvest from the keg - 2007 and 2008, back to back. Very interesting to taste the difference.

It's well worth cellaring a bottle or two to try when the next batch comes around.

I've done the same - have a six pack from last year just to see how it fares without it's fresh and green factor.

Hello!! My name is SIMAUMA. I write blog about the food.Please look.And I am glad if I link to your blog. (URL)http://food-collection-simauma.blogspot.com/