How much is that in beer? 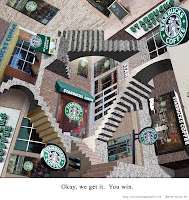 My fellow beer bloggers in North America are possibly more aware of this following situation than I am and I would appreciate any assistance with further information on this one. We have a problem. And the problem is Starbuck’s.

No real surprise there, but there’s more.

Australia is a fairly dry country, and I don’t mean that we don’t drink, I mean that we don’t tend to get a nice generous and widespread rainfall consistently. We are not referred to as the ‘wide brown land’ because of our suntans. And at the moment the continent is suffering one of its worst and longest droughts.

In homes and businesses and farms across the country people are being asked, encouraged or forced to save water wherever they can. Water authorities are giving householders free timers to encourage three minute showers, gardens can not be watered except at certain times on certain days and cars can only be washed at commercial carwash places with recycling facilities. We are all making sacrifices, because we can’t drink dirt. We are all doing our bit.

Well, except for Starbucks.

You see Starbucks has not yet found its way into the 21st century and does not realise that there is a simple and effective way to clean teaspoons. It’s called soap and warm water and it is simply all the rage out these parts. Starbucks has a better method which involves leaving teaspoons and thermometers in a thing called a ‘dipper well’ which utilises constantly running fresh drinking water to achieve a bacteria free environment. Now I should point out at this point that I have made it a personal choice (crusade) to never ever have a coffee from a Starbucks but I have made a few coffees in restaurants in my time so I feel qualified to comment.

I have no problem with people buying coffee from Starbucks or from any of the many other corporate coffee houses – I just prefer a better cuppa from a place that cares more about quality than quantity. In Melbourne especially we are spoiled for very good coffee places serving great stuff at a much more reasonable price than that slugged with a straight face by the ‘plastic coffee’ people.

And to put it all into a real perspective, here are some interesting figures. The estimated volume of wasted water in just ONE Starbucks is 3 to 5 litres per minute. That works out to around 35,000 litres a day, or one million litres per year. Per store. There are currently 23 Starbucks in Australia. Fortunately for our environment, 16 closed down earlier this year. Probably had no water left to make coffee with. But that adds up to 23,000,000 litres of water each year that goes down the gurgler.

That’s 23,232,232 330m bottles of beer that Starbucks are allowing to flow, not into the mouths of thirsty beer lovers but down the pipe and out to sea. For shame, for shame.