Yet another measure to combat binge drinking and associated late night violence which has been launched in Melbourne today has been roundly criticised by industry spokesmen.

This time a trial will take place which will see licensed venues unable to serve multiple, large or unmixed drinks after 1 am. These include shots and shooters, jugs of beer and any more than a single drink. No shouts. And already the cries of anguish and calls of “That’s bloody un-Australian!!” can be heard by the defenders of this Aussie institution. But it is not about The Shout.

Now this is not the most terrible thing to happen to drinkers but I have to question wether this will attack the root cause of the problem of irresponsible drinking. The problem as I see it is this; 1) Bloke goes out with group of friends to large nightclub or bar to celebrate or socialise. 2) Bloke has a few drinks a bit too quick. 3) Bloke begins to turn into dickhead. 4) Bloke keeps drinking. 5) Bloke becomes physically incapable of making his way to the bar but mates keep buying him drinks. 6) Bloke becomes more of a dickhead. 7) Night ends in tears.

Of course there are many variations on this scenario but the guts of the problem stems from situations similar to this. When I first stared drinking with mates I remember being well aware of staff – be it management, glassies, security or waiters – continually wandering through the venue. I don’t know that this happens to the same extent today. In the last few years of managing restaurants and bars I have seen a decline in the numbers of staff considered necessary to run a busy night and a trend towards keeping staff behind the bar rather than out and about.

My point is that if you are a well trained and well supported staff member and you are encouraged to move through the venue as the night grows long, you are more likely to see the bloke in the example above at about stage 3 – as he begins to show signs of becoming a dickhead. A quick word to the bar staff or the manager and before you know it, the bloke and his mates become aware that their time is limited if they don’t change tack. No warnings or aggro or risk of causing offence, just a subtle nod and a wink and we move on. The bloke and his mates behave and have a good night, the venue makes money and no one gets hurt.

Allow the bloke to develop full bore dickheadedness and let his mates buy him more drinks than he can handle and you still make money – but in the end, we all suffer for the folly of a few. Let him think that he can get shirt-faced and suffer no consequence and we are all in the poo. Venue managers need to be made more accountable for the drinks that they serve to dickheads. It won’t cost them money and it isn’t hard to do.

So do we solve the problem by refusing to serve multiple drinks after 1 am? Do we stop this bloke from becoming a dickhead by refusing him a shooter after 1 am? Do his mates find it impossible to buy him another drink because they can only get one at a time? Probably ‘not’ to all of the above. And really, by 1 am the beer-horse has bolted. By 1 am the problem is too far gone to be handled delicately and without fuss. The fact that this new plan will be trialled in just three venues for just one night suggests that those who have dreamt it up have no idea what goes on in pubs and bars and clubs, or they have no idea how to fix the problem.

It is too hard for pissed idiots to outfox sober, professional and well trained staff who work these venues every day. They can fix the problem. Perhaps they don’t want to fix the problem themselves for the same reason that the pissed idiots are able to get to be pissed idiots – no consequences. Maybe instead of creating time line based punitive measures to combat a problem that could have been nipped in the bud early on, is to punish the operators who allow the situation to exist.

Bang em’ with fines, threaten them with a weekend closure or removal of their livelihood – their license – if they can’t conform to simple and proven measures. And while they are at it, maybe they could get their staff to enjoy their jobs and create an atmosphere of friendliness and fun so that they become HOSPITALITY workers and not pseudo beer police. Pay them well, make their jobs rewarding and try to catch them doing something right, rather than just harping on the mistakes. They may just want to repay you with a strong work ethic, a keen eye for trouble and a vigilance that might just save us all a lot of strife. 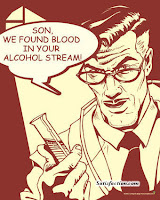