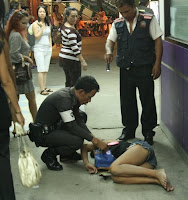 But, I told you so. Maybe I should be in government? Maybe I could become one of these highly paid ‘consultants’ who get mega bucks for bugger all. From my memory of schoolboy Latin, ‘consultant’ roughly translates as; ‘Tell me your answer and I’ll re-word it for you and that’ll be a wad of cash that would choke a camel thanks very much’.

Besides, I think I’m too honest for government. And I drink too much. Hang on, that’s a pre-requisite, isn’t it? Or at least it should be. Someone was certainly knocking back a couple of pints when they came up with the idea of a two am lock out of the ‘drinking zones’ of the city and inner suburbs of Melbourne a few months back. It was sometime back in July when I recall bagging the plan as unworkable, unbackable and unpopular and subject to one fatal error. No nighhtclub pub or restaurant who requested an exemption from this folly got rejected. It don’t work AND you don’t have to play anyway.

I suggested that a better method of deterring pissed idiots was to deploy more Mr Plods in and around the trouble spots and to reintroduce the ‘drunk tanks’ of old where blokes and blokettes who were not getting the message on responsible consumption of alcohol could be sent to cool off and sober up rather than assuming that they would make their own way home safely without starting a blue or ripping out a ‘Haley’s Comet’ in the train or taxi on route.

I picked up the paper after returning from holiday to see that (shock horror!!) “we have decided that, instead of a lock out policy, we will put more police on the streets and also provide special rooms with food and water available to those who have overindulged” said Government spokesperson for The Department of making Stupid Decisions and then Reversing them Once we Put our Brains into Gear, Mr B. Leedingobvious.

Beer Blokes, making the streets safer, one beer at a time.

Hi Glenn (yeah I know your name!),
More Police onteh streets is not the answer either. It just takes them away from catching real criminals like the Moran's!
No seriously, there is too much police presence in Australia compared to teh rest of the world. Its a little out of control and it is not like you need to be a genius to get into the force anymore either - halfwits, plus power = current Australian society. Tax more, raise revenues throug fining the majority doing teh right thing and then let the crims get away with whatever they want.

G'Day Tim,
Not sure where youve plucked 'Glenn' from - is someone out there leaving Beer Bloke-esque comments under that name?? - it's actually Pete and Dr Lager is John. Yeah, not as glamourous as Professor and Dr!

Just reading in this mornings Herald Sun about how your old 'home town' of Syn-City is about to drag the whole country down the can thanks to all the dodgy politicians there. Maybe we could combine our theories and get more coppers on the beat just to put crooked government ministers away.

I agree that it is getting frustrating to see the good guys punished over and over for the excesses of the dickhead minority. Maybe it's time to take the world back from the softy namby-pamby do-gooders and civil libertarians and allow Mr Plod to take the dickheads aside for a 'quiet chat'?

Sorry, I was trawling through an old post on Aussiehomebrewer.com and there is a Prof. Pils who posts there and his name is Glenn.

And I think more hardline measures are due. Would the Cronulla Riots have happened if the young 'New' Australian problem makers had done ten rounds with a policeman dressed as Santa Clause armed with a phone book?