Harden the F@#K UP lager 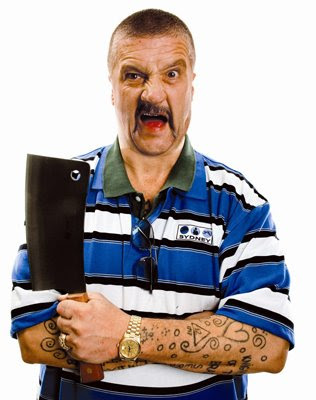 We have this famous bloke here in Australia. His name is Mark Brandon Read. To the uninitiated the name may evoke images of a starch-shirted chartered accountant or a kindergarten teacher. The obligatory use of the middle name, however, should probably give a hint as to the real fame (or infamy) of Mr Read.

He is better known by his nickname, ‘Chopper’, and is definitely NOT a kindergarten teacher. Chopper is a crim. A convicted career criminal, Read served time for various offences including assault, kidnapping, torture, armed robbery and firearm offences. He also had an inmate cut off his ears for him. Pardon?

Anyway, since leaving his life of crime behind him he has taken to making a living as an author, children’s book writer, painter and rap artist. Eric Bana portrayed his life in the film ‘Chopper’, we got to see his snag in the recent mini series on gang crime, ‘Underbelly’ and comedian Heath Franklin has made a fair career out of taking the piss as Chopper the kid’s show host, weatherman and travel agent. His catch phrase is ‘Harden The F@#K Up!!’

So you would expect that Choppers latest incarnation would be a little more ballsy than a 6% ABV lager. That’s right, Chopper has given his permission (and bank account deposit details, presumably) to the good folk at Bintara Brewery in Victoria’s Rutherglen (not too far from the stamping ground of legendary bushranger Ned Kelly) to whack his name and likeness on beer bottles. They don’t, however, have his beer on or near their website.

I am going to give the beer a go tonight and in the meantime I will leave you with this very interesting review from a Chopper fan site;

Chopper has his own Brand of Beer Guaranteed to get your ears off as Chopper would say.A mad 6% Strength

Chopper heavy is a clean Australian style lager. Its golden colour has an extra lustre with a spark or flame of light refracted in the glass. A full bodied beer with the characteristic hoppy bitterness and a thick creamy head.
The beer is paler than heavy pilsners and is made from soft local water.
The beer has a malt driven bouquet, a mild hoppy palate and a slightly bitter after taste.
Chopper Heavy is handcrafted in small batches that comply with traditional methods
Hmmm. A ‘spark or flame of refracted light’ ...

I’ll let you know what gets refracted tomorrow.

Meanwhile, here’s ‘Chopper’ pretending to be comedian Heath Franklin ... or is that the other way around? That's if I can get the stupid internets thingys to work - otherwise just look for Chopper on that youtyubey thingy ... you know, tha webbysite where all the monkeys wee on thereselfs.

Hi Prof, all you need to do to add the video is copy the embed code from youtube and paste it in the approapriate position in your blog post.

I tried that yesterday but the Inter-Gods were conspiring to thwart my efforts. That or I just pressed the wrong button-y thingy!
Anyway, I gave myself an uppercut, had a beer and told myself to Harden The F@#K Up and it worked.