Here is something else that won’t work 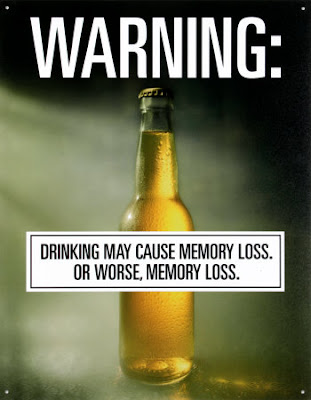 Following on from my slap to the bald foreheads of the dopey professors who wish to scare all the normal people into having no more than 1 ½ stubbies of beer at any one time (what are we supposed to do with the other half, Poindexters?!?) comes the next instalment in the Nanny State’s quest to run the whole wide world at the level of the dumbest common denominator.

Warning labels on all alcohol products sold in Australia akin to the kind used to do little more than raise tax through cigarette sales are being proposed. These warnings would take the form of graphic representations of the dangers or the results of drinking. As the ciggie warnings aim to achieve, so too would these booze-bangs be aimed at preventing silly people from doing silly things.

Picture a nice bottle of NZ Sauvignon Blanc with the winemaker’s logo alongside a rotting liver. Maybe a chilled stubby of finely crafted ale featuring a teenage girl vomiting in a gutter? Perhaps you’d prefer a six-pack of mainstream macro lager, each can showing a different pissed idiot sporting an alcohol driven injury? Collect the full set! Swap with your mates! I just need the tool with bloody knuckles who punched the road sign and I’ve got the lot!

Or consider the following tableau, acted out in one of our city’s finest dining rooms;

The immaculately presented waiter with the long white apron and starched shirt approaches the couple who are about to celebrate their golden wedding anniversary with a rather expensive bottle of imported sparkling.

“I trust sir and madam will enjoy the 1968 Chateau de Or-Hor-Horr. Note the fine moussey texture, the hint of peach and bergamot on the nose and the very fine pictorial representation of the young woman being gang-raped by the drunken low-lifes. Enjoy!!”

I’ve said it before, I’ll say it again here and I’ll keep saying it – dickheads are dickheads because they lead the lives of dickheads. They are dickheads and they won’t suddenly stop being dickheads because you charge them extra (in tax) and tell them that it is bad to do naughty things. And here’s a picture. They know right from wrong and they don’t really care. Drunk or sober. Dickheads. Get it?

The very great majority of us who responsibly enjoy a beer, a wine, a spirit or kava from a coconut shell do the right thing. All the time. Don’t punish us because there are a handful of knuckle-draggers who know the difference between a toilet and a handbag but choose to abuse and flaunt the basic tenets of civilised society. Spend some of your time, effort and research grants (from tax) and get to them at primary school before they have their behaviour approved and sanctioned by do-gooders and civil libertarians who don’t wish to see the poor little buggers punished for something that is clearly not their fault. Or is it their fault? Hmmm.