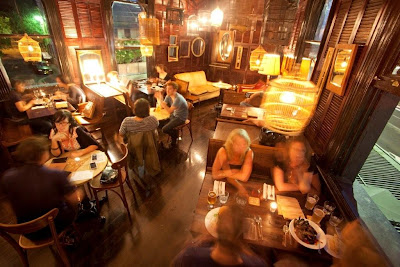 A quick shout-out to all those readers in New South Wales to let you know that The Local Taphouse in Sydney is holding their first Ale Stars session on Tuesday April 7. As regular readers will have guessed this event is one of my extra special favourite things to do that concerns beer and if you are anywhere near the joint on the first Tuesday of the month, get in and have a ball. And a beer. Or four.

Andrew Gow is the Ale Stars Tzar for the Sydney crowd and he is a bloke who is not only passionate about beer and brewing but communicates his knowledge and thoughts really well. He is also very capable of encouraging discussion and debate so those who attend will feel encouraged to participate rather than feel they are sitting in a classroom situation – a classroom where you have to drink beer, and where your homework will involve drinking more beer, but ... Interaction and discussion is what makes Ale Stars such a great night out. I was fortunate enough to have a good beer-chat with AG when he was down for an Ale Stars session late last year and I know he will bring a great vibe to the Darlo Ale Stars.

‘AG’ also knows just a little bit about beer having spent a fair amount of time as a brewer in some of Australia’s most highly regarded craft brewing operations. Mountain Goat, Matilda Bay and now at Five Islands in Wooloongong, AG will provide the nuts and bolts of the whole brewing process without the need for a Tech-Foul bell which means that beer lovers of all experience and knowledge levels will get something extra out of an Ale Stars session. If we have learned anything from the St Kilda Ale Stars sessions it is that you certainly get out of it what you put in. Be a part of it and it becomes so much more than just drinking beer.

On behalf of the St Kilda Ale Stars, I wish you all the best as you begin your journey of beer discovery!

I'm looking forward to it!

Checked out the Tap House a few weeks ago before the rugby and really like the place, we've got a new meeting place before/after games now!

G'Day Moses,
Yeah, it's in a great spot down there nice and close to the SFS and the SCG - and not a single plastic cup of Toohey's, XXXX or VB in sight!

We are hoping to do a Storm road trip some time this season - I'll catch up with you for a pint or five then!