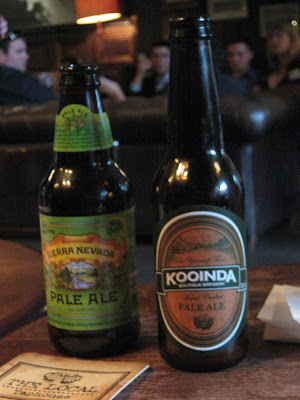 What makes a good night great? Well, since you’re reading this, I’m going to assume that you’re all thinking ‘beer’ – and you’d be right. But if the good night is a beer night to start with, you’re going to have to dig a bit deeper.

Ale Stars at the Local Taphouse in St Kilda this week saw a ‘holiday’ crowd of around half the regular number gather for some American style pale ales. But the smaller group didn’t affect the atmosphere which was as warm and as pleasant as the Melbourne evening. Why? Well, you’d have to say that the company was very well complemented by the guest brewer – in this case, three of them – who were along to share their experiences and maybe one or two beers.

I have spoken of Kooinda Boutique Brewery in these pages before and their sole brand, Kooinda Pale Ale, has made an appearance at a recent Beer Dinner at The Courthouse Restaurant. Travis, Mick and Fenton propped at the bar to share the night with the Ale Stars and did nothing to dispel the general opinion that brewers are a special breed. Relaxed, unaffected and very down-to-earth, the boys gave us the impression that we were all just sitting around at their place having a bit of a yarn about beer and stuff. 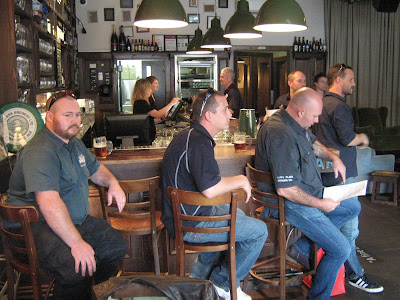 Not that there can be as much room at their place as we had at The Taphouse, what with all the brewing equipment they have working at their place. Kooinda is the only residential commercial brewery operating in Victoria – if not the country. A combination of boxes full of paperwork, red-tape cutting scissors and persistence saw them realise a four year long dream to build and run a brewery from their backyard. They even manage to run a heat exchange system for the beer by using the backyard swimming pool as a water source. As we all said on the night; “Livin’ the dream ... Liv-in’ THE DREAM!!”

Issues of noise, smell and general amenity were dealt with as required and a combination of a Cul-de-Sac location, proximity to a National Park reserve and, to a lesser extent, the fact that the local Council Mayor lived a few doors away has ensured that Kooinda has got itself off the ground without too much opposition. But with an annual output of 60,000 units and a growing customer base due to plenty of hard work and ‘home delivery’ from the boys themselves, the operation is about to move into a 500 square metre site nearby in the hope of doubling production. All the more Kooinda Pale Ale for us, then!

The boys’ only brew at this stage is an American style Pale Ale but it is one which sets a foot in a few different camps. Inspired, in part, by beers like Little Creatures Pale Ale it has a different ‘depth’ to that and some other similar beers of the style. Around 8% Vienna malt and some crystal malt give the beer some nutty notes, plenty of caramel edges and the stack of fruity hops gives it plenty of zip and balance.

It also sat very nicely between the other beers for the night – Little Creatures Pale Ale, Matilda Bay Alpha Pale Ale and the very much anticipated and equally well received pale ale that started them all, Sierra Nevada Pale Ale. I had heard and read quite a bit about this beer ;} and so was very much looking forward to sharing the experience with the Ale Stars. It is such an interesting and long awaited experience, though, and I think I should leave it for a post of its own.

As is customary, the Kooinda boys stayed back after the session for a whole new session which involves talking to every Ale Star, drinking with them (particularly those lucky enough to enjoy a complimentary Kooinda Pale Ale for winning the trivia – again) and generally mingling with those who get to drink the fruits of your combined labours. I know the brewers appreciate this opportunity to meet face-to-face with the end consumer after toiling so hard to produce something you HOPE they’ll like. The fact that the Kooinda boys present as so very down-to-earth, boys-next-door kinda blokes and were so generous with their time gave the night an extra dimension. 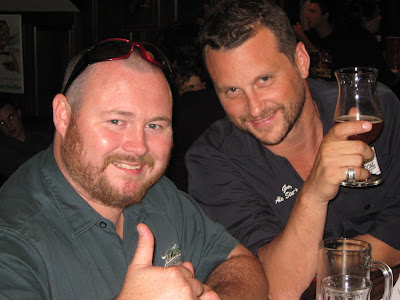 A great night again and special mention to the staff of The Local Taphouse for all the hard work in feeding, watering and generally cleaning up after all the Ale Stars. The announcement that the next session will see us try some sour beers of the Lambic persuasion was met with a little resistance but I bet they’ll all be back anyway.

Hi people. Trav here from Kooinda, just wanted to let you know we had a great night and hope you enjoyed the beer. What you as a group are doing for the industry is awesome.
See you again soon, Cheers to Guy, Justin and Bek for their hospitality :-) and to Professor Pils for the great Blog!
And remember... Take Yourself There...