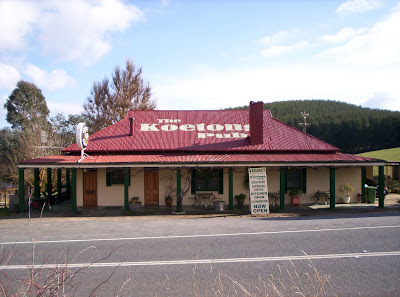 I got a call from Big Kelv (a St Kilda Ale Star) while he was on holiday up near Albury on the NSW/Victorian border asking for some help.
Mum was cooking up some corned silverside and wanted to ‘up the flavour’ a bit with some beer and, between us we were able to get some James Squire Amber Ale into the mix and, by all reports, it came out OK.

I then got a message that he was off to his ‘old local’ in the mountains, the Koetong Pub. He described it beautifully – “where the beer is still at genuine 1972 prices and the pool table is 20 cents.” I have only been to a handful of country pubs and it’s nice to think that there are still some that maintain those elements of ye olde Pub charm.

The Koetong Pub was built back in 1883 as a coach house and rest-stop along what is now the Snowy Valleys Way – a nice drive comprising a nice lazy arc that runs from Beechworth in North-East Victoria to Gundagai in New South Wales and manages to shoe-horn 45 pubs into a drive that might take no more than a few hours.

The Koetong has been given the title of ‘the highest hotel in Victoria’ but what really caught my eye was Kelv’s description of the pool table rules. “20 cents a game – payable at the bar because the coin mechanism broke about fifteen years ago!”
The only question I have regards the whole Pub Pool general Rules of Play. Just as in the song ‘In A City, Girl’ by weddings, Parties Anything, how can you play pub pool if you can’t;
“Put your money on the table and
Put your name up on the board.”?

Here’s cheers to the best of the best Australian country pubs,
Prof. Pilsner

...and for those interested, the Koetong Pub is up for sale. Pool table included.
Posted by Beer Blokes at 12:52