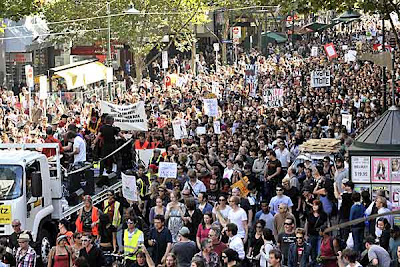 It was very pleasing to see the massive show of People Power in Melbourne this week as an estimated ten thousand turned out for a lively but peaceful protest against the State’s ‘one-size-fits-all’ liquor law changes.

Led by Australian music icon Paul Kelly the crowd followed a flat-bed truck down Swanston St in a recreation of AC/DC’s classic 1976 film clip for “It’s a long way to the Top”. The protest was aimed at shining a light on the short-sighted answer to the problems caused by pissed idiots in a few of Melbourne’s large, soulless booze barns run by greedy operators intent on spiling everything for the rest of us.

When live music venue The Tote made the decision to close its doors a few months back as a result of increased license fees it made plenty of people realise that the enjoyment of many was being threatened by the disrespect of a few and I guess that’s why I saw Tuesday’s protest as a massive blow for people power and made me think that there might actually be a groundswell of public feeling out there that ‘we’re not gonna take it’!

Increased license fees and forcing live music venues to employ security is just adding unnecessary expense to many responsible operators while ignoring the fact that there a no more than a handful of cowboys in the industry creating legions of drunk idiots every night of the week. And they can absorb the extra charges as they will just cram another hundred or so in to cover it.

Get rid of the cowboys and discourage the pissed idiots and we’ll go a long way to solving the problems of lawlessness and disorder in our city. A city that, as ACCA DACCA shows in the clip, was once young and innocent and welcoming and cars were allowed to drive down Swanston Street and listening to a band and having a few beers with your mates didn’t mean you’d end up dead in a gutter.