Big Helga and the Beer Dinner 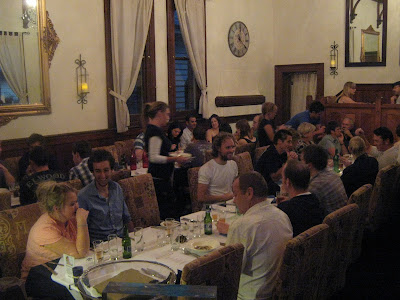 It was pretty appropriate, really, that the biggest Beer Dinner I have been involved with was also a showcase for Matilda Bay Brewing Co’s newest release, Big Helga. Big on numbers, big on atmosphere, big on service and food and big on guests – we had the lot.


I have hosted Beer Dinners at The Courthouse Restaurant in Berwick for the past five years and we usually manage to attract between 12 and 26 people to each which is more than enough to ensure a fun night that never manages to take itself too seriously. This time around we stopped taking bookings when the numbers breached 60 as we were already committed to a couple of tables who had booked for a ‘normal’ night in the restaurant. To the thirty or so we weren’t able to accommodate – sorry! 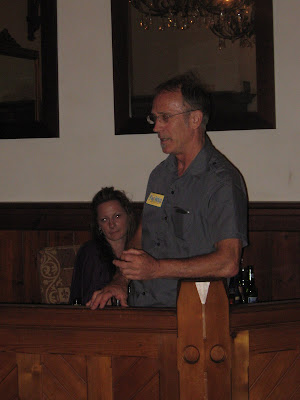 Neil Whittorn from Matilda Bay ‘invited’ himself along for the festivities along with an offer to talk about beer and bring with him as much liberated product as he could sneak out of the brewery without Scott noticing. The fact that we had planned to showcase Big Helga probably helped make the decision easier for him.

Our theme for this Beer Dinner was Australian craft beers based on traditional international styles and from European and Munich lagers to English ales, American Pale Ales and Chocolate Porters we had a fair slab of the beer world represented.

A full house provided a solid buzz throughout the night and some masterful food matching and culinary skill meant that everyone was treated to some pretty intense experiences of taste, flavour and texture. From the opening beer, a crisp and palate-prepping Coldstream Pilsner the stage was set for a sensory symphony. 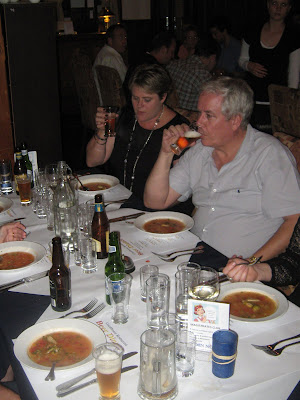 The guest of honour (Big Helga, or maybe Neil) then took centre stage and a Beer & Barley soup made the perfect partner for a dry Munich lager. So rich and full were the soup’s flavours that many are still wondering whether it really was vegetarian.

A beer braised beef cheek followed, along with a pair of beers to demonstrate the amber nectar’s ability to complement or cleanse. A Fat Yak and a Beez Neez are as different in body, flavour and finish as you could get and they showed beautifully just how easily beer adapts to the drinker’s requirements for refreshment and interest on the tongue. The beef was braised in a James Squire porter and the richness was delightfully offset by the citrusy tang of the honey wheat beer and nicely complemented by the boldness and body of the American Pale Ale as well.

Pork belly slow cooked in an Asian master stock was the main course and a James Squire Original Amber Ale was the perfect partner for these flavours. Mellow yet firm with enough middle strength to match the pork and just enough bitterness to clean and prepare the palate for the next instalment, this English amber ale did the job well. It was also a nice way to introduce some of the novice drinkers to something a little different to their usual tipple.

The evening finished with a Holgate Temptress from Holgate Brewhouse in Woodend. A chocolate porter, deep dark and rich with some bright notes hidden within due to the inclusion of Dutch cocoa and whole vanilla beans proved to be a terrific pairing with a rich chocolate mud cake with a dollop of mousse made from Southern Tier’s Raspberry Porter. 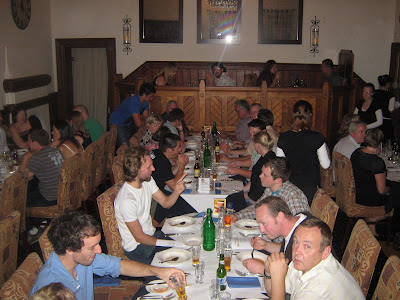 A huge thanks to Neil for generously sharing his time and passion with every table and for giving the proceedings an air of technical efficiency without letting it get beer-geeky at all! While the large crowd made for a few service challenges it certainly made it a busy, noisy and very beery evening and. Although we will probably look at capping the numbers next time around, this dinner will go down as a cracker.

You wouldn't happen to have any photographs of the food by any chance?