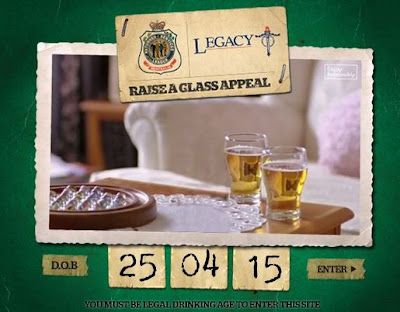 A bit of a reference to the length and complexity of this post but it is something very close to my heart and I can’t just skim over it. Grab a beer, sit back and relax, and let me know what you reckon.

I’ve been thinking about the ‘two-sides-to-a-story’ factor surrounding the continuing argument surrounding binge-drinking and advertising’s role in its promotion.

This year’s VB “Raise A Glass” campaign has exceeded the total donated in last year’s inaugural campaign with $1,281,000 already in the kick. The 1.1 million raised last year came from a combination of direct website driven donations and a marketing promotion whereby $1 from specially branded slabs of VB was added to the total by Foster’s.

This year, as a result of some fairly negative publicity and the refusal of the Queensland branch of the RSL to participate last year, Foster’s moved to distance the fundraising from the notion that a commercial business can have a heart and still make a dollar and made a direct lump-sum donation to the appeal. And here is where it gets a little murky.

To give you a bit of background and the chance to make up your own mind here’s the story.

A dollar from every slab of VB donated to RSL charities. (Changed this year to direct donation)

A website designed to encourage current and ex-servicemen and their families to post stories about
the Australian experience in war over the last century.

A section on the website where donations can be made online. 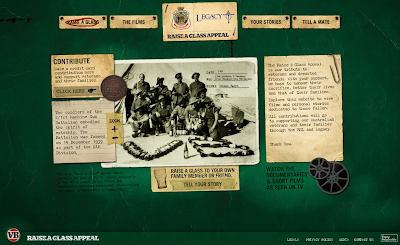 The Against side; (with associated quotes and published arguments)

The association of a beer brand with the Raise a Glass appeal this year has raised the issue of binge drinking and its place in Australian culture on Anzac Day. (The Australian, April 2009)

"In recent years, Anzac day has morphed into an opportunity for young (and not-so young) people to get shit-faced and soppily nationalistic, which makes it an ideal target for a big beer company.

"VB's Raise a Glass campaign will no doubt find favour with anyone who thinks binge drinking is an appropriate part of remembering Australians who have served in wars, and it will raise plenty of useful funds for Legacy, but that doesn't make it ethical." (Trevor Cooke, Corporate Engagement Blog)

"People drink to excess because of exactly the message you're pushing on us. Loss, hurt, pain? Raise a glass! Raise another one! "We're giving you an excuse to keep going at it as well. And a warm, fuzzy feeling because a couple of bucks went to a charitable and decent organisation." ( Morgwn Shaw, Digital Art Science blog)

In shortened form, that’s the guts of the debate with the key elements of both side’s arguments outlined. The “NO” side contends that beer and ANZAC Day are poor bedfellows, that VB is ‘using’ the RSL to sell a product and that binge drinking is bad.

I can’t help thinking that this is another case of shooting the wrong messenger. I contend that we don’t have an alcohol problem as such – we have a dickhead problem. We have a problem with not enough parents prepared to show a good example to their kids nor to pull them into line when they stray from the guidelines of behaviour in a civilised society.

The argument that beer has no place in a commemoration of Australia’s most significant actions on the world stage rides a bit thin with me as well. Digital Art Science blog uses, among others the point that “Do veterans not struggle with alcohol abuse as they come to terms with the aftermath of their involvement in a conflict? Hasn’t anyone at VB/Legacy’s agency ever listened to Khe Sanh?”

Yeah they do, and I’m sure they have. Is it not OK to provide some money that might end up helping more than one or two of them, even if it means that a large chunk of the population (which doesn’t have a drinking problem) has to donate it? And if you’re going to quote classic Chisel, choose lyrics that help your argument – Khe Sahn references “Speed and Novacaine” not VB and more VB. Just sayin’, that’s all.

I reckon Defence Force chief General Peter Cosgrove sums it up pretty well in one of the ads when he says that he reckons Australian soldiers would hate to be thought of as anything but regular men and women despite having done a job for their country that was nothing short of extraordinary. I reckon they might also have appreciated a quiet beer at the appropriate time and that they might just have cut loose on leave at one time or another. Raise A Glass is as much about remembering them and taking the time to ‘share a beer’ with those no longer around. It certainly DOES NOT glorify war, nor does it encourage, promote or condone idiot drunken behaviour.

And some, on ANZAC Day might just down one too many with their remaining mates at a pub or an RSL (I had more than a few with some of them in Canberra last ANZAC Day) but I reckon they’ve earned it. Does the VB Raise a Glass appeal have a direct causal link to drunken dickhead binge-drinking and violent behaviour as some are suggesting? Hardly. That’s not to say we don’t have a problem – far from it – but let’s not try to solve one social problem by banning a totally and unrelated different social activity.

These are just my thoughts. It nice to think that the freedom to criticise something and the technological means to transmit these criticisms and my ability to pose a contrary position are all the result of the actions of people who went before us and gave up plenty to defend the principals of goodness against evilness.

Thank you to you all. I will ‘raise a glass’ in your memory. And not just on ANZAC Day.

"I contend that we don’t have an alcohol problem as such – we have a dickhead problem."

If I could marry that sentence, I would.

See you at Ale Stars.