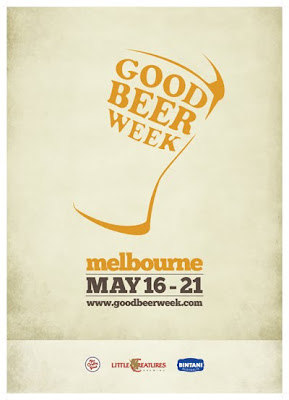 Before Good Beer Week hits the ground running (or should that be ‘pouring’?) there is still plenty of beery cheer to enjoy in Melbourne. How lucky are we, really?*

With Wednesdays and Fridays at Mountain Goat, $5 Pint Night at Biero and any number of venues from The Local Taphouse south of the city to The Terminus in the north, Y & J’s in between, a dozen open-to-the-public breweries heading south, north, west and into the Yarra Valley in the east and so much more besides it’s a pretty lame bloke who can’t find a good night out with good beer.

In the past month or Beer Blokes has been out-and-about attending, organising or hosting Beer Dinners from one end of the metro area to the other as well as into the sticks spreading the word on good beer and its remarkable ability to adapt to so many food dishes. From dining rooms with 30 eager souls to restaurants with 100 beer novices, pubs and hotels and other venues are embracing the concept of food and beer matching.

And what’s more, the concept of just getting together as a group to enjoy good beer and fine food is gaining traction. Pubs are once more becoming community hubs in something of a cultural backlash against the soulless pokies-serenading beer barns. They are a meeting house where locals and friends can gather and share and converse over an ale. At every dinner hosted or attended recently strangers have turned to introduce themselves, opinions have been shared and experiences compared. New friendships have been made and contacts swapped. Beer is bringing them together.

But we need look no further than our nearest state borders to see that this climate of beery cheeriness is not universal. With venues struggling to get planning approval and others closing down or winding back due to a variety of factors, it’s a good opportunity to ask what you can do to ensure that good beer and its purveyors are protected and nurtured. Hopefully the more we build the beer scene here the more positive the impetus to do the same in Sydney, Brisbane and Adelaide.

So as we prepare to spend a week of running around giggling like giddy little schoolgirls at a Justin Beiber concert taking in all of the sights, smells, sounds and tastes of Good Beer Week let’s also take time out to ponder this; what am I going to do after Good Beer Week to support good beer in Melbourne? Which venues on my ever-growing ‘To Do List’ will I actually get out to visit? Which venues and retailers will I make the trip to so I can see for myself what all the fuss is about? Which new beer friends that I intend to make during Good Beer Week will I promise to catch up with at a ‘local’ in the next month?

Remember – good beer and its venues and suppliers are only as strong as the market allows. Don’t take them for granted and assume that they will always be there .... next week. Or maybe the week after .... bit busy this week ....

Good Beer Week kicks off on Monday May 15 and consists of events to suit every beer taste and budget. From tastings at Slowbeer and Purvis Beer to Beer Dinners at The Terminus Hotel and The Local Taphouse to The BeermenTV Hair of the Dog Breakfast and the Great Beer Debate at Ormond Hall and week-long special offers and surprises around town – there’s something to tempt all. Check it all out at www.goodbeerweek.com

*Seriously though, we cannot sit back and take for granted the wealth of venues and events available all year round in Melbourne. Writing for The Critics’ Choice has highlighted to me the lack of popular and retail support for good beer in some of our sister states. We need to get out and support our venues where we can and spread the word at every opportunity.