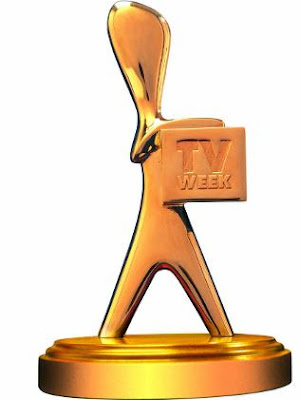 Now that the Hoo-Hah has subsided over the Numpty Family Nuptials it’s time to turn our attention homewards. Tonight sees Australia’s premier event on the social calendar, The Logies, enter its 53rd year.

Every year we see the same old stuff. The ‘Ruby Carpet’ could just as easily be re-named “Tits Out For The Boys Parade” and the ‘celebrities’ are ‘famous for being well known’ rather than for any perceivable talent they may possess. But, like any decent car crash, you can’t help but stop to stare.

The controversy is the same every year as well. And not the ‘who’s up who’ dissection of every soap opera cast or the ‘how many warm Crownies til someone does something news-worthy’ kind of debate - but the nominations that cause the most froth and bubble. Each year the Greatest Side Show on Earth revolves around who got the nods and who should’ve been shot.

Personally I have tried to care less about The Logies but I just can’t. With three girls in the house I only get to watch a lot of Sponge Bob Square Pants and ABC3 so I’m probably a bit out of step with current televisual trends and couldn’t pick most celebs out of a Police line up stacked with Oompah-Loompahs. But I do know beer.

So here’s the thing. What if celebs were beers – who would be who? If there were Logies style awards for beer, who would take the top gongs. “Ladies and gentlemen, welcome to the Beer Worlds night of nights – The Brewgies!”

And to the prestigious Gold Brewgie Nominations;

Rebecca Gibney –Consistently solid performer without ever reaching any dizzying heights. Always on screen and thereabouts but you’re likely to reach for something more ... ‘now’. Cooper’s Sparkling Ale.

Jessica Marais – Came onto the scene with a glamorous burst of publicity and soon captured a huge following before disappearing without a trace. VB Raw. (Except for that bit about the ‘huge following’.)

Karl Stefanovic – Like salt and pepper he seems to be in everything from morning and weekend telly to covering major events and disasters. He may be innocuous enough to be inoffensive but that doesn’t make him worth seeking out. Thin and flavourless while making people think he has journalistic integrity. Proving that quantity and availability don’t necessarily mean quality. Pure Blonde.

Adam Hills – Top bloke, family friendly, take-him-anywhere, show him off in front of the kids or Grandma. Always around without wearing out his welcome and always delivers what he promises. Also able to provide those little quality highlights that make him a ‘must-watch’. Little Creatures Pale Ale.

Chrissie Swan – Has a very small band of loyal followers who managed somehow to engineer a nomination. Everyone else is still nudging the bloke next to him and asking; “Never heard of her? What does she do?” Vale Ale.

Enjoy the awards if that’s what you’re into. I’ll be there, waiting for the car crash and drinking a nice award winning beer. Or two.

And who would've thought that Pure Blonde would win out? Jeez, sometimes I really have no faith in the Australian market...