Getting the Dads together 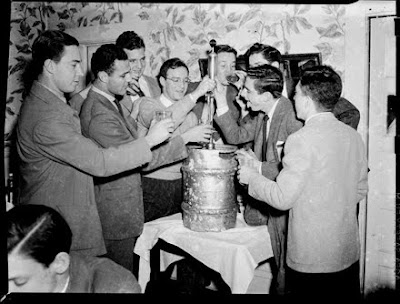 Once upon a time there was a bloke. He lived in a green and pleasant land and time marched on slowly as he found his way in the world. The bloke grew up and found a girl. They were soon married. Then they had a couple of kids. Suddenly life began to move at a faster pace. Work hours were longer and quality time shorter. Life’s little simple pleasures were fewer and more fleeting.

I write these words not as a fairly ordinary attempt to write a modern fairy story but as a cautionary tale of taking the time to smell the roses. Or, in this case, the hops, malt and yeast. You see, I learned something the other night about being both a Beer Bloke and being a Dad.

A booking for a beer tasting at a little pre-school in a Bayside suburb was made in the hope that the Dads could get together and get to know each other. For those not yet along the path of the great journey of educating your offspring, I’ll say just this; it is an experience that is the most exciting and at the same time most challenging and frightening of your young lives. And it flies by bloody quick.

So for the dozen Dads and a few of their mates and associates, this beer tasting was meant just to give them an opportunity to meet and perhaps lock away a few faces with whom they will take the journey. This is what I was getting at when I started to write this piece. I can reflect on my own ‘journey’ and realise that your kids’ education is not as simple as handing the little ones off to the teacher at 9 each morning and having them returned at 3.30. It is indeed a journey and a partnership. And it takes a few helpers to make it a rounded and valuable experience.

These blokes got together in the kinder under the assembled artworks of their children and surrounded by big picture books and pots filled with jumbo textas to sample a few nice beers. And here’s where my own beer journey came to realise that it had covered some distance. Standing there, pouring beers and discussing the various relevant back stories or style parameters of each made me acutely aware that many of these blokes knew little about what they usually drank but were very keen to learn. Just like their kids, really. But without the beer. The kids, that is, not the Dads. More of that later.

It wasn’t that they didn’t want to learn about beer or take a discovery tour of different beers it was just that they didn’t really know how to begin the journey. It was easier to drink what you always drank. In many respects, these Dads were like any of the other blokes I have been fortunate enough to share my journey with. Because, like them, I have met hundreds more who, for whatever reason, are more afraid of being disappointed than they are expectant of being pleasantly surprised. “I might not like this new beer so I’ll stick to what I know” is an all too common fallback for many.

Now imagine that the kids in the kinder class took the same attitude. “I’m pretty happy reading picture books, playing in the sand pit and not washing my hands a lot; might just stick at this level”. Luckily for them (and for us) they possess a natural curiousity for the big wide world around them. This thirst for knowledge means that they read increasingly difficult books with bigger and bigger words and they learn to write their names more legibly. They make the leap to the third rung of the monkey bars and they keep getting scraped knees until they can ride a bike or a scooter.

So when do we suddenly stop looking for new challenges and bigger tastes and beers with different labels with foreign writing on them and stop worrying about how bad a beer might taste and instead wonder how good a beer might taste? What makes us sit there and think; “Don’t imagine I’ll ever find a nicer beer than that so I really can’t be arsed looking”?

Just as we want our kids to take the educational journey of discovery and to suck up every piece of wonderous knowledge along the way and to be constantly amazed and delighted at every turn, we should want the same for our adult selves. And, just like the partnership of teachers and friends and family that our kids need, so to should we grab some mates and head out along the beery trail to new horizons – together.

For the record, and for those wondering, yes, I had meant for this piece to be a bit of a review of the beers we shared at this particular Beer Blokes Tasting and something of a plug for the Beer Blokes Tastings but on the night I realised that that there were many parallels between our beer journies and our other more educational ones.


We bumped into your blog and we really liked it.
We would like to add it to the Petitchef.com.

We would be delighted if you could add your blog to Petitchef so that our users can, as us,
enjoy it.

Petitchef is a french based Cooking recipes Portal. Several hundred Blogs are already members
and benefit from their exposure on Petitchef.com.

To add your site to the Petitchef family you can use http://en.petitchef.com/?obj=front&action=site_ajout_form or just go to Petitchef.com and click on "Add your site"