A VIRTUAL TOUR OF THE BEER BLOKES' BREWERY

Shown here is the basic starter kit which has all you need to brew your first 23 litre batch of beer.

For around the $ 150 mark we got a 30 ltr fermenter including a digital thermometor and liquid level indicator, a fully submersible heater, hydrometer (for measuring alcohol content) & flask, stirrer, brewer's sugar, bottle sanitiser and brush, 100 crown seals, sugar scoop (1/2 and full teaspoon ), bottle filler and a free standing bench capper. Included was a premium beer kit of our choice. We added the 2 ltr jug and a kilo of dry malt extract for an extra $ 10. 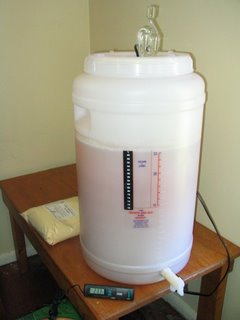 Finding the right spot to site your fermenter is the most difficult and important consideration. You need to be able to access it easily - particularly early on, as you will be checking on the little fella every hour, on the hour ! Take into account that for steady, reliable fermentation with an ale ( or top fermenting yeast ) you will need to maintain a temperature below 30 c. With the heater, you wont need to worry about the temp. dropping to dangerously low levels.

Also to consider is the day to day operation of your household and family - they may have difficulty sharing your enthusiasm and accepting that the family room is now the world centre for new beer discoveries and the future home to gold medals and commendations at the beer awards.

So find a spot that can be temperature controlled and accessible, that is out of the reach of children and the demented, and that is raised high enough so that the hydrometer flask can be filled easily. If the spot is also easily seen as a kind of centrepiece to all who visit your humble abode, then, BRAVO - all the better, I say. Shown above is a little used corner of a lounge room - no more than a coffee table area - and little used because there is now a 30ltr fermenter on a coffee table there.

This is pretty much all you will need to get brewing without destroying home and/or marriage, I think ( see future posts for updates ). A little knowledge, which can be found in books or, better still, from a home brew supply shop is essential and will see you on your way to your first brew.
You don't need to be a scientist or chemical engineer - though I know of a few of these who have come up with some pretty fine beers, both homebrew and commercial - just pay strict attention to sanitation and cleanliness and don't panic. I think. This, and a little luck and you should be able to brew something that is ... 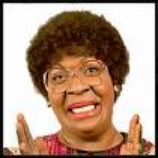 JUST WHEN YOU THINK YOU'VE GOT IT ALL WORKED OUT ...

Having recovered from the backslapping we'd given each other over the perfectly executed first fermentation, I sat down with a few good books and a very good beer only to discover that our hitchless first attempt at brewing may have been, in fact, NOT PERFECT AFTERALL ! (Cue Dramatic Music).

You see, as necessity is the mother of invention, so too is assumption the mother of all stuff-ups.
Being keen to convince ourselves that we were already beyond the qualifications necessary to become first time homebrewers, we confidently strode ahead to step two brewing - replace sugar with malt extract. As sugar tends to thin the brew and adds nothing in the way of flavour or character, malt extract adds both flavour and head retention and so should logically replace the sugar. Right ? Yeah but not ALL OF THE SUGAR !

We had decided to start brewing in a logical fashion - begin with a brew kit to get the feel for the equipment and stuff and then experiment with hop additions, wort boilings and maturation ( see, we know all the big words) as we became more adept. I had looked at the ingredients in the kit and ASSUMED that the 1 kg of malt extract was for the brew and the 1kg of brewers sugar was for priming at bottling time. In went all the malt, out went the over confidence. Some advice from my Brew Mentor at the home brew supply shop stopped us from becoming dejected - "It may take a little longer to ferment out and be a little lower in alcohol but you haven't broken it."

One, Take the time to understand the role of all the ingredients and,

Two, Make sure you get first hand advice from a home brew shop.

Having said all that, the brew is into day six of fermentation at a steady 22 degrees celsius and is already at about 2.5 % and smells just like beer - which is good - so we're guessing all is not lost.
Anyway, must prepare for bottling in a few days by sourcing empty bottles. Luckily I have an empty bottle kit in the fridge.
Posted by Beer Blokes at 14:18 No comments:

Welcome and thank you for visiting Beer Blokes.
Finding this site means that you probably fit into one of the following categories;

In any case, you are here now, so stay a while, have a laugh and maybe even learn something along the way. 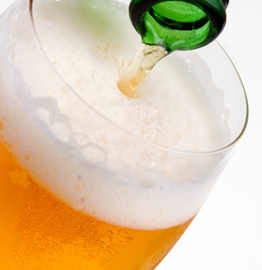 Much excitement was afoot as we prepared our virgin brew. It all went without a hitch and the waiting game has begun. See brew details
Posted by Beer Blokes at 13:10 3 comments: