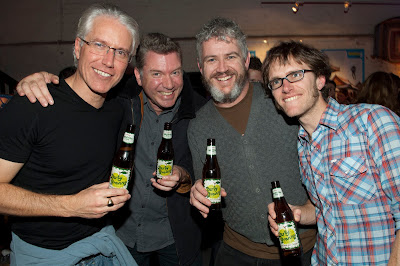 Here's a link to my latest article published in Australian Brews News.

Don't say that I don't make it easy for you, huh? 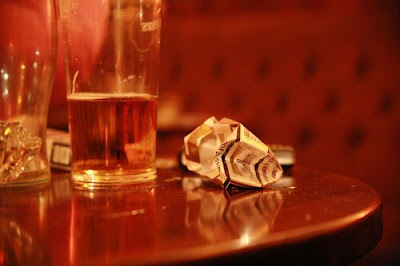 A bloke walks into a pub and saunters up to the bar. He nods to the smiling barman and orders a beer.

“There you go, mate,’ says the barman, ‘that’ll be ten cents.”
“Ten cents?” says the bloke, incredulously. “Do you do counter meals here?”
“Yes, mate, T-Bone steak and a pint – Fifty cents.”
“Jeez, that’s alright! Where’s the bloke who owns this pub?”
“Oh, he’s upstairs with my wife.”
“What’s he doin’ upstairs with your wife?”
“Same thing I’m doin’ down ‘ere to his business.”

Cheers,Prof. Pilsner
Posted by Beer Blokes at 11:01 No comments: 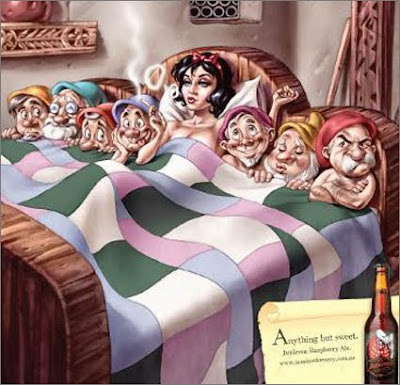 [I first published this 'tale' back in August 2009 when I was setting the menu for a beer dinner at The Courthouse. As we will be unleashing this ale on a hundred or so country folk at The Plough in August this year, I thought I'd do a bit more research and revisit this story of beer, broads and political correctness. Or something.]

Some more Beer Karma. I was sorting out the beer selection for the Beer Dinner at The Courthouse Restaurant featuring Spring Beers and had decided on Jamieson Raspberry Ale for the dessert. It just so happened that I had a couple left in the fridge from my recent visit and I thought to myself, “well, that’s as good an excuse as any to crack one and remember what it tastes like – for research purposes, of course!”

Looking at the label I recalled how Jeff Whyte had changed the look of this one to reflect the line that the beer is ‘Anything But Sweet’. It now has a stylised raspberry shaped hand grenade which suits the beer nicely.

It also made me recall the lasting impression I got as I left the brewery with my takeaways. A large poster frames the exit door and, had I not been in a hurry, I would have unpacked the camera and snapped a memento.

The poster depicts a beautiful and artistic representation of a reasonably well known fairy tale character who lived with seven ... short statured? ... diminutive? ... under-sized? .... oh, for f*&@s sake, they’re DWARVES (I’ll get around to giving you a serve soon, do-gooders!).

Again using the tag line of ‘Anything But Sweet’ ‘Ho White’ is seen blowing Smoke Rings (the mysterious Eighth Dwarf) while snuggled up in the bed with her seven live-in miners. I thought it was one of the funniest pieces of tongue-in-cheek advertising I had seen in a long time.

This morning I read that the Evil Empire, The Disney Corporation, has had a Dumbo-sized hissy fit that THEIR sweet little girl was being used without their permission. By which I’m sure they mean a large hunk of cash. Call me crazy, but I didn’t think anyone owned fairy tales except those that wrote them in the first place. I could be wrong and maybe Disney has bought the cheeky little Woodsman Woo-er and her crew of Dopey, Grumpy and otherwise mal-adjusted mates.

Either way, lighten up. The kids won’t see it and no one else cares.

The beer, by the way, is a cracker. 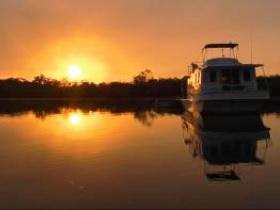 [Since I'm on holiday I thought it might be a bit of fun to give this exercise another run. In a nice little piece of Beer Karma, these very same guys and girls were back for last week's Beer Dinner at The Courthouse. We spoke of the first time they'd come in and how I still use their experience as an example to others of the joys of stepping out of your beery comfort zone.

Have a read and then put your minds to completing the exercise.]

Just before Christmas I looked after a group of young people who were keen to ‘try something different’ from the restaurants’ Beer List. The blokes were all ‘mainstream drinkers’ but had tried Little Creatures and some James Squire stuff and so were keen to extend themselves.

By the end of a fairly long night they had fallen in love with – wait for it – Kwak and Innes & Gunn. Now that’s a step up from VB and Pure Blonde! So much so, in fact, that they wanted to buy a slab of I&G from us then and there to take away. They were heading up to Mildura to spend the holidays on a houseboat on the Murray River and reckoned that a 6.2% Oak Aged Scottish beer was just the thing for lazy care-free days floating along a river and contemplating life.

They were in again last night for a 50th birthday celebration and, true to their word, they had headed out to Purvis Cellars and hooked not only a slab of Innes & Gunn but a slab of Kwak (plus glasses) as well.

So here’s the question; If you have to take slabs on a houseboat (and let’s assume there are no ‘Float-Thru Bottleshops to buy anything once you’re away) which TWO BEERS do you choose? For the purposes of the exercise let’s say you’re away for two weeks. One for each slab. Some of you may want to team up with someone else if two slabs is not enough.

Cheers
Prof. Pilsner
Posted by Beer Blokes at 10:56 No comments: