Something’s brewing out this way 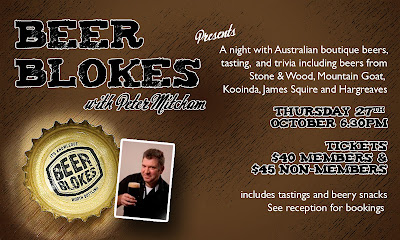 For those not following my regular contributions to Australian Brews News (Australia’s best and most informative online magazine for beer and brewing news and opinion that I write for) you may have missed news of my coming event out in the outer Eastern suburbs.

I’ll be hosting a Journey Through Australian Boutique Beer out at the very nicely appointed Club Kilsyth in Bayswater North (my friends in the ‘inner’ suburbs, look it up in ya Melways – it’s there!) which I hope will be the first of regular beer events for those folk out east who have not had the easy access to good beer that we sometimes take for granted.

Together we will take a tasting paddle to five different styles, as represented by some of the country’s best craft beers, from a nice easy drinking lager through wheat beers, amber and APA through to porter. Accompanying finger food will be served as will a generous helping of Beer Blokes Beer Trivia and plenty of Q & A and general beer chat.

This is a great opportunity to support the craft beer scene and help spread the word out in the eastern region that places can serve more than just the standard mainstream offerings served by the jug.

I, for one, am looking forward to being part of it. Hope to see you there.

By the way, the reason that the guys at Club Kilsyth happened upon this idea was as a result of them coming all the way out to The Terminus Hotel for the very successful Gold Medal Beer Diner during Good Beer Week. We owe them one, don't you reckon?