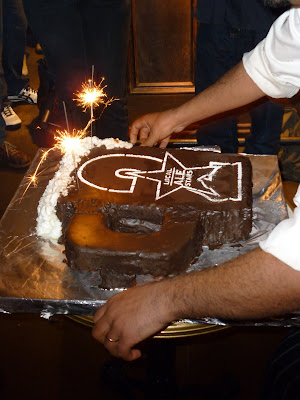 There’s just something about beer, isn’t there?

A social lubricant, a new baby head-wetter a toast to the bride and groom or a glass raised in memory – it’s always there. Always has and always will be. Goodness, you can even enjoy a quiet one on your own.

But a beer shared is a real experience.

Two years ago Ale Stars began with little more than polite applause from eight drinkers who were not really sure what would happen. This week it celebrated its second birthday with a craft beer-fuelled fanfare before 82 people, most of whom knew exactly what to expect. What a difference two years, 50 signed-up members, almost 100 different beers and plenty of Wednesday morning sleep-ins can make!

Ale Stars, in essence, is a beer appreciation ‘session’ where drinkers gather to taste four or five samples of a particular beer style, or the assembled offerings of a craft brewery. They are ‘led’ by a host who describes the characteristics of the style, gives a bit of history and peppers the evening with witty asides, some challenging trivia and the chance to ask questions. A guest brewer may be on hand to introduce his or her beers personally and shed some light on the brewing process or the trials and tribulations of running a small business.

But it is so much more than a simple paragraph can convey.

I usually devote this page each month to describing the sometimes amusing and always entertaining ‘doings’ that transpire on these nights (I’ve attended every session apart from the very first) and I list the beers we tried and the thoughts of the guests and I often attempt to translate Shandy’s hosting, but this time will be different.

Apart from the fact that the room was generously dotted with real, proper beer-writing journalists who will no doubt write more tightly edited and less rambling descriptions of the event than I could manage, I decided late in the piece that I would focus on ‘the vibe’ and ‘the feel’ and the ‘this-is-what-it’s-really-all-about’ kind of thing instead. 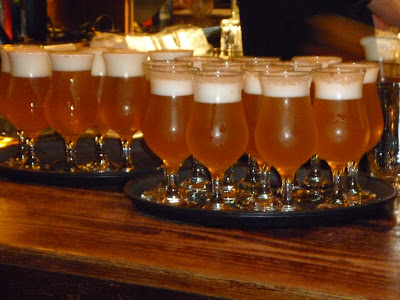 I have the distinction of choosing to travel 40 minutes by car to get to Ale Stars each month and, while this can somewhat curtail my ability to fully immerse myself in the experience, it gives me a great insight into how it affects people. In particular, those who are able to enjoy the ‘fringe benefits of Ale Stars. These include SUBS (Sneaky Upstairs Beers before the session), TWEENIES (beers enjoyed in between the listed samples), AFTERS (self explanatory, really) and even SHOULD’NEES (Beers enjoyed after AFTERS when, really you should be heading home, but you stay for just one more – “Oooh, ah SHOULD”NEE, but why nort?”) G’Day Shandy!!

As a result, I often find myself in the midst of conversations that truly illustrate what it is about Ale Stars that is not good just for the craft beer scene in Australia, but also for its people on a more personal and community level. What The Local Taphouse has tried to create is a ‘local’ where anyone can meet and feel at home. It’s like those pubs we have probably all read about or heard about or even dreamt about but assumed were consigned to the pages of Pub History.

Don’t get me wrong, for many it is all about the beer – good beer brewed well by good people – but for many I think it is becoming as much about a sense of commonality and shared experience and community as it is about trying new styles or discussing brewing techniques and ABVs and IBUs and such.

It is in these conversations that I have learned more about what drives beer culture, about why young people are able to move more freely from VB to Russian Imperial Stout than my predecessors ever were and about where this journey is taking us all. Speaking to people who genuinely appreciate what it is about beer that drives their passion and satisfies their curiosities and provides for them real friendships and more than a few laughs. These are what it is all about.

And Ale Stars provides these opportunities – even if it didn’t set out to do it and even if it doesn’t realise that it’s doing it!

That’s more than enough philosophicality for one post. I will write more about the 2nd birthday party later because having the Mountain Goat crew on board en masse as well as the first pouring of the 2nd edition of the Homebrew Champions collaborative effort with the Goat Guys is all worth its own page. For now, I just needed to pull together all the little thoughts and feelings that were buzzing around my head on the drive home.

For the rest, I’ll let the pictures do the talking. 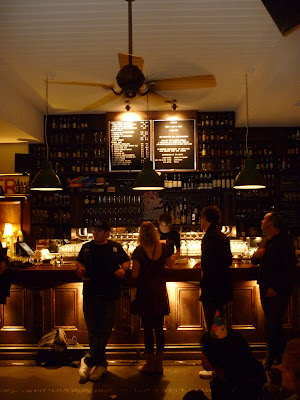 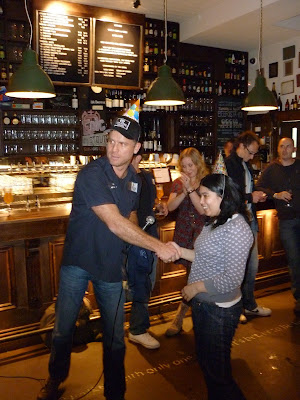 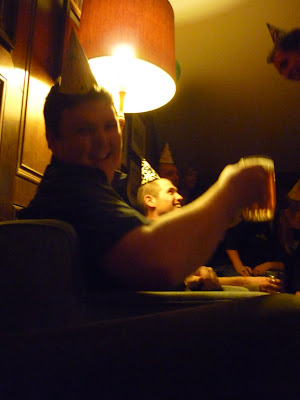 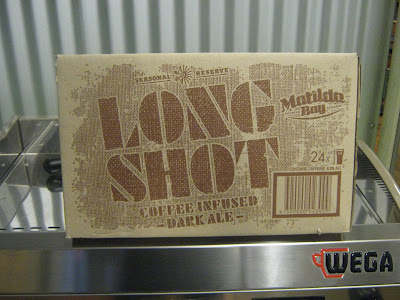 If you’ve ever wondered how a brewery gets its beers “known” to the end consumer – look away now. I have no answers to that one.

I’m not going to shed any light on how the marketing types attached to the brewer dream up ways of pushing product or image-branding or market penetration or whatever other terms are used to describe what I think we used to call ‘advertising’.

But that’s not to say I’m not fascinated by the journey of a beer from an idea to an item – that can be a pretty cool process. Earlier this year I found myself in the middle of one beer’s journey from concept to consumer and was more than happy to float along in the moment rather than worry about how it all worked. 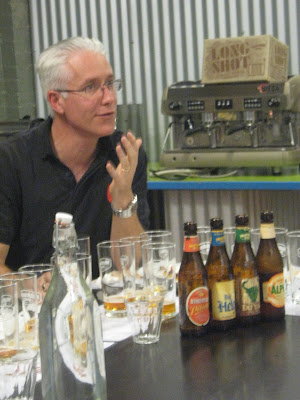 Longshot is a coffee infused dark beer released earlier this month by Matilda Bay Brewing Company in collaboration with gourmet coffee roaster Toby Smith from Toby’s Estate. Over a quiet ale or three in Darlinghurst’s Local Taphouse the conversation turned from “isn’t it interesting how coffee beans and barley malt are roasted in a similar way?” to “let’s make some beer and work out a way to get coffee into it!”

What they’ve achieved is a well crafted and rewarding dark ale that tastes a treat on its own (I was fortunate to receive an invitation to visit the garage and sample the beer with Toby and Head Brewer Scott Vincent before the coffee was added) and when combined with a cold-extracted coffee made from Ethiopian Yirgacheffe beans creates a nicely balanced, easy drinking but very rewarding ale.

There’s bitterness in there and your palate will have trouble discerning whether this is derived from the coffee or the hops, so seamless is the meshing of beer and bean. It looks good in the glass, it has nice aromas on the nose and, if you close your eyes and let your mind wander as you sip, you could feel yourself sitting in a big comfy chair by a gently crackling log fire. It’s nice that a beer can do that.

A seasonal release, Longshot will be limited to a run of 5,000 slabs and is available only at Dan Murphy’s. This element of the marketing strategy is the one which is sure to divide opinion. On the one hand it can be argued that ‘them who truly support the craft beer industry’ have been ‘locked-out’ or, on the other hand, we can be hopeful that a few more ‘average Joes’ will be exposed to beers of a more challenging nature for the fact that they are on sale in the land of bland beer.

While I can see the validity of both points of view, I’m happy in the knowledge that good craft beer is more readily available to those ready to take a chance on a new beer – afterall, if I look at where I was twelve years ago, I found my way to more interesting beers through places like Dan’s. I probably wouldn’t have felt as much ‘at home’ in a specialty beer shop as I do today. And, from a commercial viewpoint, I’m sure that the bean-counters were more than comfortable with Dan Murphy’s offer to effectively fund the experiment by guaranteeing to buy the end product. 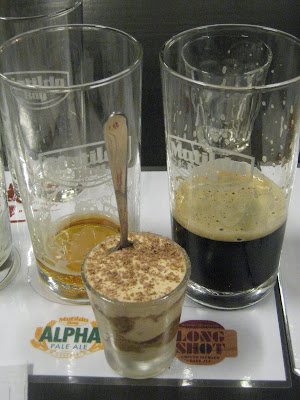 Back to the launch on Thursday last, it was a treat to be part of an intimate setting for a dozen like-minded souls, hosted by Liquid Ideas and Toby Smith and Scott Vincent. A casual sit-down with Matilda Bay beers matched to respected Melbourne Chef Andrew Blake’s inspired canapés, served in an informal ‘interactive’ dinner party format – very nice! Good beer-blogger company, good food and good beer – did I miss anything? Think not!

There has been plenty written about the beer in the blogosphere and wether it ‘ticks the boxes’ or not – is it ‘coffee enough’, is it too exclusive, is it beery enough, does it compare to coffee flavoured stouts; my advice? Buy a four pack, pour them one-by-one into a nice glass and decide for yourself.