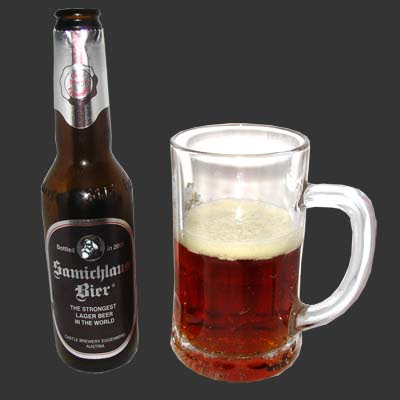 Samichlaus is brewed on December 6 and then matured for 10 months before release. Produced from a fair whack of Pilsner malt with a little Munich 25 it is brewed using a double decoction method and, as a result, shows some kettle caramelisation in the flavour and the colour. Two hop additions ensure a balanced flavour profile and a hardy yeast able to withstand the workload required of a 14% beer give it an estery fruitiness.

I haven’t tried it yet. I am drawing my descriptions from the writings of the late Beer Hunter, Michael Jackson. The other Michael Jackson (skinny white guy with no face, one glove, lunatic) is still alive but he’s slowly working on it. So am I.

Michael Jackson wrote of Samichlaus beer back in 2000 when the Castle Brewery at Eggenberg revived the brew after a four year break. It was originally produced in 1979 for release in 1980 and sold up until 1997 when the brewery went bust. From what I can gather it has been brewed every year since then by the Eggenberg boys in conjunction with the original brewers. Subsequent batches were designed for cellaring to round out and enhance the flavours overall. The piece is well worth a read as it details the secrecy with which the brewer guards his craft and the stealth with which someone who was as good at his own craft as Michael Jackson guesses the rest.

Known as the Santa Claus beer I can only imagine if the jolly old fat bloke from up North had even one of these beers before taking off his reindeer would turn into pink elephants and he’d be lucky to back the sleigh out of the Pole without hitting it. Two or more and he wouldn’t be able to find his own arse with both hands. The actual translation of the word Samichlaus is Santa Claus in ‘Swiss-German’ but I suspect it’s actually Santa Claus in ‘Pissed-Idiot’. As in “Sami .... Shammi ... Shaaa-aaa-aaa-mY, Mate!!!! ORLUVYOOO!!! Nah, seruss-ly, mate ... mate ... ma-a-a-a-ate. FEN LEGEND MATE!!!”

It is interesting to note also that some insist his beer is a Doppellbock, while others will proudly call it the world’s strongest lager. Don’t know wether either is necessarily wrong, but it highlights the ways in which beer ‘labels’ can serve to confuse and divide opinion. As long as it’s liquid and beer-flavoured, I’ll give it a crack and leave the pedigree up to those who want to play those games.

Thanks Chris for the gift of the Christmas beer and thanks to the good folk at Sword’s Select for stocking these kinds of beer. I’m on call this week so I won’t be into the Santa Claus beer until next week when I will let you know what I think of it. For what that’s worth.

Any truth to the rumour that it was this beer that lead Beer Hunter Michael Jackson to pen "Don't Stop 'til you get enough"?


No. Didn't think there was.

Hmmm? No but I believe this beer was the inspiration behind "Get on the floor" and a particularly big session led to the writing of "Off the wall"

I'm pretty new to this Beer Blogging but I'm really impressed with your Site - very cool!!!
I'm from Dublin and I've recently set up my own very amateur blog. Love if you could throw your eye...
'Deveneys lovely beers' if you get a chance!! Thanks,I love your blog!!

Thanks for visiting, Ruth,

I shot straight across to your blog - that's what the Beer Blog-osphere is all about, networking! - and have added you to my links.

I hope we can keep you all up to date with what's happening in the beer world here in Australia. I'd also like to officially welcome you as our first Irish Correspondent!!

Don't know how we'll go with transport and tax and duty and that sort of thin, but f I see something on your shelves that I like, can you deliver!?!