Well, the busiest week of the year has drawn to a close (if you don’t count preparing for a New Years’ Eve full restaurant and a full-house back at home a-waiting) and now I have a minute to reflect and review the season’s beery offerings for you.

Fortunately, with a young family of our own as well the two sets of grandparents to take into account AND the Littlest Pilsner celebrating her birthday just after Christmas, the Pilsner Clan deigns to spread the festive cheer over the course of the whole week. Lest we all just burn out very early and things get very ugly.

After closing up the restaurant late on Wednesday night and hanging back with the Chef/Owner to crack a celebratory ale and review the busiest month we’ve had, my mind was already sorting and ordering the festive beers to come. Christmas Eve is shared with Mrs P’s family and with the Brother-in-law (and fellow Ale Star) in attendance the beers are always varied and festive and interesting. This year we just happened to ‘click’ and bring some of the same beers to the party.

Beginning with a Budvar – a cracking palate-prepper – we helped to get the dinner ready and keep the kids away from the presents under the tree. Moving to the table we launched into a Christmassy-themed Weihenstephaner Pilsner (click on this link if you don’t know why it’s a Christmas beer) which was soon followed by a Red Hill Bohemian Pilsner. A second Weihenstephaner Pilsner served well as a palate cleanser for the ‘treat’ to come.

Earlier in the year some Samiclaus were purchased and put away for Christmas. They were put away for a number of reasons including the fact that, at 14% ABV it is NOT an everyday beer, that it is brewed ONLY on the feast of St Nick each year and then cask-aged for ten months before bottling, making it a vcery ‘festive’ brew and, finally, because Shandy had warned me, in no uncertain terms, against drinking it while it was ‘fresh’ – i.e. in the same year it was bottled. “Hard work” was how I think he described it.

A bloody hard effort, wrapped up in a difficult task and served up on a bed of nails with side dressing of ‘shit-this-is-bloody-hard-work’ would be closer to it. Maybe it had something to do with the beers which had preceded it? Nup. I can’t imagine having the Samiclaus as a starter. The alcohol content does not hide behind the well balanced malt and hops – it stands like a big Kiwi bouncer out the front of the Mouthfeel Nightclub and stares you down as if to to say; “Sorry mate, not in THOSE shoes.” 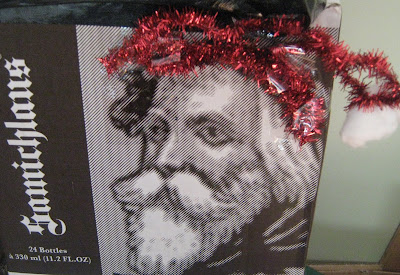 Warm – to the point of discomfort – with some nice, if subtle, spicy, blackcurranty, fruit-cakey kind of flavours which just can’t quite break through the heavy richness of the overall palate. Thinking that this might be one of those beers that needs a little warming to release its true character we sat back and waited. A sip. And we waited. And we waited. It never got better. Not that it got any worse – it just didn’t get better. If anything the alcohol warmth got a bit ‘petrol-y’. And not in a nice, fuel-your-engine-and power-out-of-the-straight kind of way.

As I packed the car and carefully stowed my Christmas present of Sierra Nevada Pale Ale, Anchor Steam beer and Meantime Chocolate (what’s Xmas without chocolate?) I realised that not all Christmas beers bring about Christmas cheer. Putting out a nice icy cold Little Creatures Pale Ale for Santa (after giving the car keys to Mrs Pilsner) I realised that the difference between a beer being great and not-so-memorable is about half an hour.


Christmas Day with three young kids in the house is one of life’s most underrated and pleasurable experiences and one which deserves a post of its own – except it is not nearly as beer-related! Needless to say it involves lots of superfluous packaging, English-from-Chinese translated instructions and AA batteries. After which you seriously need a beer.

Seems my warning was not quite enough. It's a brave man I think that ventures to open one that's less than a few years old. That alcohol needs some time to oxidise and mellow out. It's HOT alright.

Yeah, I thought a year would have been enough - not even close! Might stick to the Weihenstephaner as my Christmas beer and toast Good King Wenceslas rather than St Nick in future.

Thanks for including one of ours in your Xmas celebrations. Happy New Beer. Cheers.

Judging on the taste of a one year old Samiclaus, I'm proposing that the good Professor and I stash a half a dozen under the Prof Pilsner Laboratory and consider sampling one between us come Christmas 2012.

If Peak Oil ever occurs, we could potentially use the remaining ones to fuel the Prof Pilsner Prius.

2012? I'm steering clear for another three on top of that. At least.

Does the potency of the young Samiclaus have anything to do with high (or low) gravity?

With an end result of 14% I'm not sure it made a whole lot of difference!