"Beer is Proof that God wants us to be Happy" 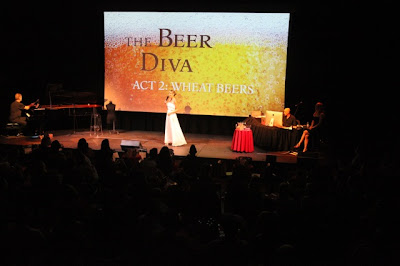 A Date with The Diva

Every now and then the planets align and circumstances combine to provide an opportunity to do something different, something a little crazy and something ... spur of the moment.

So when I received a subscriber e-mail from Kirrily Waldhorn, The Beer Diva, requesting a registration of interest for an upcoming show at The Sydney Opera House, Mrs Pilsner said, “Why don’t you go?” As best mate and co-founding Beer Bloke, Dr Lager had recently moved to Sydney I figured it was as good an excuse as any to pay him and the family a visit so I said; “What the Hey?!” and tapped in my details.

I mean, really, how often do you get an invite to go to the Sydney Opera House and drink beer?

The Beer Diva’s show, ‘Beer is Proof that God wants us to be Happy’ is so much more than just drinking beer. Although, to be fair, it’s a pretty good part of it. Anyone who has attended a Beer Diva beer dinner, beer and cheese experience or beer tasting will be familiar with the basic concept. The audience, seated at floor-level tables in a cabaret style layout is taken on a journey of beery revelation, beginning with a brief and entertaining history of beer, through beer pouring rites and glassware care and even some fun facts and figures segments which beautifully defend beer and seek to bust the myths that surround it.

The show is set out in five acts, each act starring a different beer style. The style is explained from an historical viewpoint and in a cultural context and – now here’s the good bit – fuelled by the thoughtfully arranged beers on each table which the audience enjoys in concert with the host. A Beer Captain is appointed at each table and charged with ensuring the beers are poured well and distributed to the rest of the table.

I won’t go into detail about each style here, I’m assuming you know a little about different beer styles and your imagination can fill in the gaps, but I have to briefly make mention of the opening beer. As we arrived we were seated at our tables which were already set with the night’s supply of beer. A wit, a pilsner, a lambic, an amber ale and a porter sat teasingly in the centre of the round table, beckoning us. I reckon I had the order sussed out fairly immediately but I kept second-guessing myself on the place of the limbic – as a sweet/sour finisher? As a mid session palate cleanser? A curve ball thrown in somewhere else?

We began with the Lindemans Kriek. Genius! Not only did it break the ice by getting everyone at every table talking amongst themselves, but it swiftly crushed any preconceptions about what beer CAN taste like! No mainstream lager, this! No bitter and fizzy session BBQ swill! Is this even beer?!? To select this beer as the opener was a masterstroke that set the scene for the rest of the evening and kept us waiting expectantly for the next surprise.

Our table was made up of two other groups, a pair of couples and another couple and there was plenty of beer to go around. But, as I always say, there is ALWAYS room for improvement. Dr Lager and I had spotted a guy at the table in front of us sitting on his own. After the second beer we decided that he must not have been waiting for friends and offered him a spot at our table. Afterall, you can’t drink beer on your own in this sort of setting. He graciously accepted our hospitality. “Not so fast, mate,” we interrupted as he grabbed his coat and made for our table. “You’d better bring those beers with you, eh?” “You might also want to grab those chockies, beer glasses and showbags as well, Champ” chimed Dr Lager.

And so it was that our night really got going.

Each act revealed the next beer and more engaging live music and cleverly produced animation projected onto the huge screen above the stage gave the audience a humorous take on various beer subjects as well as giving The Beer Diva a chance to take a breath and a change of wardrobe. In fact, it was not until the third act and beer arrived that I reckon the last of the crowd realised that each style was accompanied by a ‘matching’ evening dress – I don’t mean each new dress had a different beer spilled over it, but that the colour of each outfit matched the colour of the beer – and though I don’t know fashion, I know she carried them well. I thought to myself that it was fortunate for Kirrily that she hadn’t chosen to showcase Corona as it’s so flavourless and thin the matching dress would have to be pretty short and see-through.

The Beer Diva’s engaging nature and humble stage presence combine to ensure that the night remained informal and relaxed, a steady yet ambling rhythm keeping the evening moving while neither rushing nor dragging it out. Her ability to paint the picture, while ‘keeping it real’ meant that everyone from novice to know-it-all was entertained and engaged.

She may, however, want to re-think the part where a male member of the audience (“Mr Muscles”) is summoned to the stage to assist with a beer pouring! The chances of this bit going pear-shaped as a result of the consumption of the aforementioned beers is a constant threat and Kirrily may need to ‘plant a stooge’ in future performances. Kirrily, you have my number! (Having said that, we bumped into Saturday nights’ “Mr Muscles” after the show in Circular Quay and he was still ‘livin’ it large’ on his new-found fame!)

It is a credit to Kirrily that she was able to engage the audience – many of whom had little idea what quite to expect – and make history, culture and philosophy live. And all through beer! 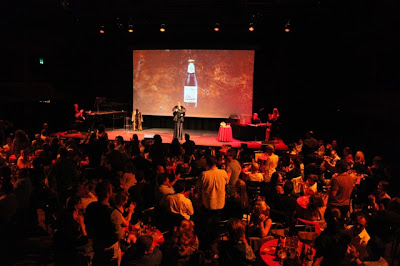 For those familiar with the origins of the Beer Diva and, specifically, her ‘beer epiphany’ the night concluded with a porter and chocolate matching. I tell you, you’ve never heard so many oohs! and ahhs! and “that’s not bads!” fill a room at one time.

The night drew together the realms of beer and art, of entertainment and education and music and laughter – plenty of that. A big off-Broadway style musical finale closed the evening and vocalist Leah Thomas’ high notes had us reaching for our Speiglau’s lest she shatter them.

Dr Lager and I set off and found ourselves in a taxi heading to the Darlinghurst Local Taphouse.

But that’s another story!

A big thanks to Kirrily for an exclusive 'audience' with the star after the show ...and for generously sending me these photos. I was being very good and not taking pics during the show like we were asked!

And, for those curious, Alex, the bloke we dragged off the table for one was in town from Canberra and came to the show because it was "the only show that happened to be starting when I got to the box office!" Gotta love that!
Posted by Beer Blokes at 15:14

Please someone convince Kirrily to do a Melbourne run! Sounds fantastic!

Had a chat to her after the show and said as much. Just needs the right venue to do it justice. I cheekily suggested that Melbourne had more than a couple of nice places dedicated to culture that should fit the bill!

Hurrumph! I was waiting for a review of Kirrily's frocks! Oh well, guess I'll have to fly to Melbourne and see her show there...