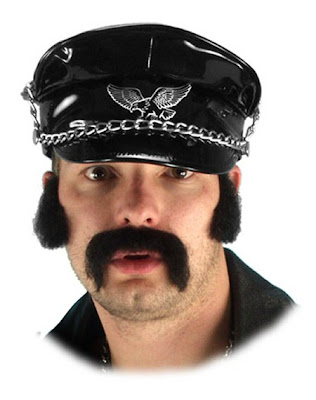 G'Day Beer Lovers, I hope your attempts to raise awareness and funds for Men's Health initiatives is going as well as your no-Mo Growing is.

For those who don't know, MovemBEER is Beer Blokes very own fun and fuzz-friendly way to raise money for a good cause without having to subject your face to moustache-based attrocities that leave you looking like you've just joined (or recently escaped from) a religious cult. You know exactly what I mean.

Drink good beer instead. Make sure the beer has 'MO' soemwhere within in and pledge to donate the value of those beers to a Men's Health charity like Beyond Blue or Prostate Cancer Foundation or directly to a mate who is doing the real Movember.

Here are some of the beers that I have managed to squeeze into the frame;

all pretty obvious so far, huh?

McLaren Vale Vale Ale (a nicely balanced easy drinking ale with a nice hop character. They have been criticised for contract brewing despite promising to soon Make their Own)

and finally, and most obscurely ....

Kooinda Valhalla Golden Ale. You ready? Here goes. The Kooinda boys named their brewery Kooinda to sum up the origins of the company where four mates got together on weekends to brew beer in the backyard. Kooinda is an Aboriginal word meaning 'Happy Place'. The Aborigines presumably gave us this word because they had no further use for it. Same with the word for 'Let's Get Together and Have Fun' - MOomba!

I never said you had to be politically correct, did I?!

So you see, you can drink just about any beer and make it fit the criteria for MovemBEER. Send your best efforts to me and the best one, as judged by me, will win a signed copy of The Critics Choice - Australia's Best Beers.

To find address of charming restaurants in the gites dordogne visit here : http://www.gitesdordogne.nl

Hello, my name is Trebor Semaj Luap Evarg, and I'd like to know when your next beer function is because I would like to come along. Please let me know the details.

Thank you very much for writing a beautiful post, you have put your thoughts very beautifully inside this post, not every person can write such a beautiful post, as beautiful post you have written, this is the best post in your life. Keep writing posts I wish you well.
Gurugram escorts agency
gurugram call girls benefits

Escort girls in Delhi make independent Brahma; Delhi call girls are always ready to serve you for interested people. Call girls in Delhi have been placed in many categories. Surely we are available according to you, you can come on our website and contact us. Delhi Escort Service

Escort girls in Delhi make independent Brahma; Delhi call girls are always ready to serve you for interested people. Call girls in Delhi have been placed in many categories. Surely we are available according to you, you can come on our website and contact us. Female Escort In Delhi

Welcome to Gurgaon Escort Service. We provide one to one sexiest girls and provide cheap service rates. You can visit our website to take advantage of the service. Cheap Escort Service In Gurgaon