Just in case you thought it was over ... 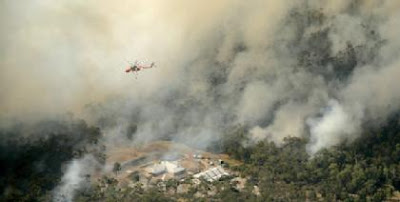 Chatting casually over a beer with a mate last week we both made a disturbing observation regarding the Victorian bushfires that scorched a large chunk of the state on February 7.

In the days of extreme temperatures leading up to Black Saturday, experts, commentators and anybody with a forum to talk was comparing the conditions to those that contributed to the Ash Wednesday bushfires of 1983. These fires claimed 79 lives in Victoria and South Australia including many fire fighters.

It was at this point that we realised the current fires had not taken hold in any of the towns or suburbs that had become synonymous with that tragedy, in particular the towns and communities in the Dandenong Ranges half an hour east of the city of Melbourne and five minutes from our town. Worse still, the recent decade of drought had left the ranges and surrounds tinder dry and full of fuel.

Just before 3pm yesterday afternoon a grass fire began as a result of someone grass slashing in a paddock and within minutes a smoke plume the size of Oprah’s arse had risen above the backdrop of the hills to our east. Within twenty minutes it was well on it’s way to becoming a twenty hectare blaze. By school pick up time a reasonable degree of panic was beginning to set in as parents picked kids up from school or discovered that road closures and lock-ins meant that they couldn’t get to the kids school at all. By 5pm a relief centre had been established and evacuations had begun and by 6pm, instead of a nice cold beer, I was out setting up lighting and organising crews to man a CFA staging area where half a dozen strike teams of six vehicles each was assembled to fight the blaze into the night. 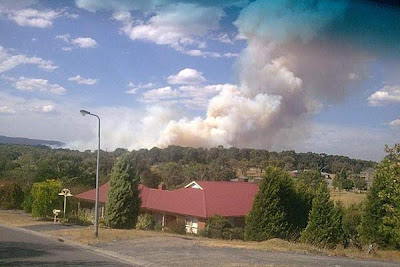 Grandad came over to mind the kids as Mrs Pilsner was away at a conference. In keeping with the bushfire theme, the original location for her conference was Warburton an hour east of here but a CFA major threat warning meant a hasty change of venue. Fortunately, the company hosting the event had a sister venue in Hepburn Springs, two hours north of Melbourne. Unfortunately, a CFA major threat warning was issued for Daylesford, eight kms south of Hepburn Springs for a fire covering abou 2,000 hectares,so she sure trumped mine! The conference was able to continue but they may not be able to get out anytime soon! Lucky I’m good at looking after kids!

I was back at the staging area this morning and, while the fires in our backyard are under control, there are concerns for the rest of the week – especially as Fridays expected top temperature of 38C with wicked winds means everybody on fire trucks is still as toey as a Roman sandal – so it may be a while yet before we get round to that nice cold beer.

So, while the worst bushfires in our history have begun to fade from the front pages of the paper, it’s sobering to think that some 800 plus appliances are still cleaning up or are on standby in those areas and dozens of others are bracing for round two out this way. Interesting, also, to speculate about the hundred or so evacuees at the relief centre we are co-ordinating and the other hundred or so at two other venues just the other side of the hills – before February 7, I bet most would have stayed behind to defend their homes. I guess that day highlighted the value of loved ones and the difference between flesh and blood and bricks and mortar.

PS Shandy; hope you enjoyed your Mr Extreme Bike Dude weekend in the Dandenongs! When you told me you’d be burning up the track .... !
Posted by Beer Blokes at 13:21

hey guys, haven't heard from you for a while. How are things going with the fires? Are your families and friends ok?

G'Day Damien,
Still here - fires are still either burning in about ten locations around the state or storms are brewing! Can't win! I'm out and about on duty so the posting is on hold till I can catch my breath. SES units are on stand by as severe weather warnings mean high winds bringing trees down and hampering the fire effort. Thanks for your concern - have a beer for us until I can sit back and have a relaxing one myself! As I write the winds have picked up and the pager is going off like a frog in a sock.

PS Loved your bit on Stoic Philosphy 101 - haven't touched on it since first year Uni about twenty years back! Your two paras made more sense than that whole year!