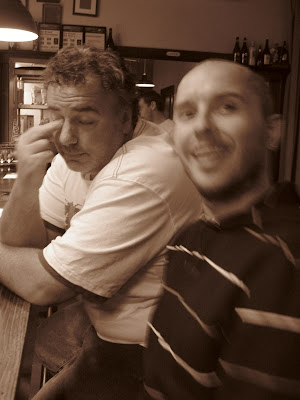 More than just a beer festival

The Australia Day long weekend is a great opportunity for people who really enjoy a cold beer. Or four. The weather is invariably conducive to a nice relaxed session and a day off on Monday for many means that the session can be that bit more relaxed. If you also happen to be a fan of places like The Local Taphouse this is even better.

SpecTAPular is a celebration of beer held once each season and features draught beer around a theme. That’s draught as in poured from a keg to a glass through a tap – not a big brewery name for something in a bottle that came out of a keg 100 years ago. This Sunday of the long weekend saw the hosting of the third SpecTAPular and 20 Australian Summer beers were featured, some for the first time in Victoria and one for the first time outside the brewery.

Dr Lager and I met Shandy at our favourite spot at the corner of the bar around eight and - ‘Let the festival begin!!’ Being the thoughtful and dedicated beer blokes that we are, we studied the ‘form guide’, discussed the various merits of beginning with one beer over another, organised the order of The Shout – and then started with number one on the list.

We had all had the Knappstein Reserve Lager before in the bottle and this was the first time that this beer was kegged, so we had to have a crack at that. Strewth! To say that this beer had a dry-bitter finish would be a bit like saying that Oprah’s a bit fat. All three of us agreed – a different beer in the keg to the bottled version, intriguing but maybe a tad heavy on the ‘suck-the-saliva-right-off-your-tongue’ finish.

A ‘taster’ of Red Hill’s Belgian Blonde followed (thanks, Ben) and we earmarked this one for a full measure later in the evening. I think we went for a Murray’s Pilsner next (I lost the form guide that I was ‘ticking’ some time later that night) and, again, a treat to have this one on tap. First time in Victoria, so that’s like a double tick! It’s a cracker.

When we arrived, we scanned the beer offerings and decided on the two or three that we would definitely find room for, and the foremost of these was next on the list. Wig & Pen is a Canberra based brewpub and one of their seasonal is the Summer Frenzy Framboise. Again on tap for the first time in Victoria, this is a raspberry wheat beer of no little pedigree. Considering that all that really comes out of our nations’ capital is politics, porn and legal fireworks, this beer is a very pleasant surprise. Complex and tart and sweet and malty and somehow managing to get hop flavour in there as well, this beer was probably the pick of the festival.

That was probably a great point at which to say, “Well, we’ve had a great night and finished it with a great beer”. Or not. Onwards we trekked, for there were just too many beers that were tempting us to try them. After the Framboise we felt a cleanser was called for and the Bridge Road Brewers Australian Ale was yet another pleasant surprise. A different beer to the bottled ale, this did the trick. Not too much of anything, easy drinking and it also prepped us well for the next. By the way, we weren’t knocking these down as quick as it is taking you to read this! Right, Shandy?

A Matilda Bay Alpha Pale Ale from their Brewers Reserve followed – cracker. Then Shandy’s eagle eye spotted a Rogue Ales XS Crustacean sneaking out of the cellar and wandering upstairs. We followed it and Malt My Barley!! this is a beer. An unfiltered and unfined barley wine made with four malts, two hops and Rogue’s own Pac Man yeast this thing was one of the most remarkable ales I’ve ever tasted. Luckily we only had a ‘taste’ as this thing not only tips the bitterness scale at 110 IBU, but it also pops in at about 11.5% ABV. 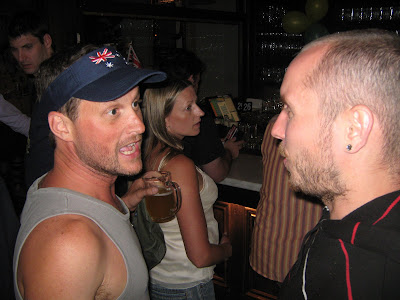 We decide that this was a good time to hit the road as Dr Lager was the designated driver and had stopped drinking three shouts back. He pointed out that it began to get a bit boring not drinking and watching your mates drinking. We laughed! We left Shandy as he hit the bar for an extra or two. That’s all I can remember.

SpecTAPular is well worth the trip out to the Taphouse for a few reasons. The fact that they offer 60ml tasters for a dollar or so means that you can try a wider range of beers – or ‘collect’ ones you haven’t tried if you’re a bit of a ticker – and still not kill your palate or risk falling over in the street on the way home. The prices for a regular vary between $4.50 and $7.50 with most hanging around under five bucks, so it’s out there with most paces offering this good a selection of decent beer.

It is also a chance to talk about beer in a very ‘non-nerdy’ way. The number of times we saw strangers turn to each other and say; “What’s THAT one? How is it?” during the night was something that a ‘normal’ night at the pub lacks.

A special note of thanks to Ben and James for their hospitality, to JJ, Steve and Guy for the organisation and dedication that goes into nights like this and a special thanks to Stephan who must be one of the Beer-Tenders going around. And JJ, I don’t think anyone saw you deck that beer later in the night so I reckon you got away with it. 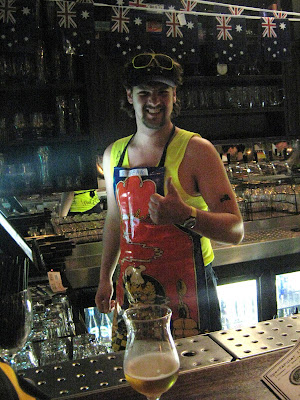 If you can, get out and support this kind of event as it will give Melbourne, and Australians, the kind of ‘beer cred’ that other beer drinking cultures enjoy. It won’t happen overnight – but it WILL happen.

Phenomenal! I can't imagine an event like this when I left the country about 4 and a half years ago.

The craft beer scene back home seems to be growing in leaps and bounds. I'm looking forward to keeping up with your blog.

Oh, and glad you liked the Old Crustacean. Rogue brews up some amazing beers!

Have just visited your blog and I hope we can keep you up to date with what's happening 'back home'. The craft scene is growing rapidly and even in the last year there seems to be more and more interest.

The Rogues have landed recently and The Local Taphouse hosted the launch of the first ten in the range.

If there is anything we can do to keep the home fires burning for you, or you have any questions, just leave a comment for us and we'll find the answer or make up something that sounds reasonable!