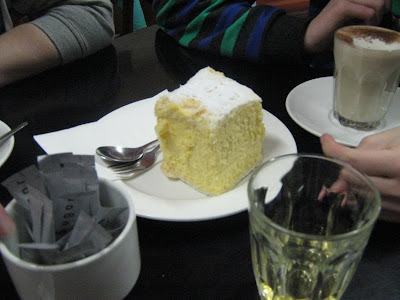 One of the variables that come into play while you’re holidaying is the food. Tourist destinations can be hit and miss when it comes to feeding a range of diets, preferences and attitudes – especially where young children’s appetites are concerned.

Country towns can often supply plenty of Road House crap, dodgy processed stuff wrapped in that crinkly plastic that won’t burn and massively large serves of Pub Favourites which are big on size and small on flavour. And, like Forrest Gump, until you get there, you never know what you’re gonna git.

These small rural and regional destinations will always, however, throw up a nice surprise every time. You just have to find it. In Mansfield I found the ultimate example of my all time favourite non-beer treat – The Vanilla Slice. Or The Snot Block to its devotees. For the uninitiated, The Snot Block is a tasty pastry made by sandwiching a thick slab of set vanilla custard between to thinnish layers of crispy puff pastry and topped with either a layer of vanilla icing or a generous dusting of vanilla icing sugar. Mmmmmmmm .... colesterolly!

Most Snot Blocks fall into the mid-range as far as quality goes – it’s pretty difficult to find a bad one – but a really good one is a rare treat. This was as rare a find as you could hope for. As you can see in the picture, this thing was less of a dessert and more of a doorstop; thick in a generous way, custard-y in a very homemade way and delicious in an overall way. $4.40 and it was a bargain. So much so that we stopped in at cafe Forty-1 on our way back to Melbourne. Partly to get another one and partly because this treat was SO good, I had eaten it all before I realised that I hadn’t taken a picture of it for the blog.

Why, you may ask is this Snot Block review on a beerblog? Good question – glad you asked. Eating this (after speaking to the staff at Forty-1 to confirm that it was not just homemade but homemade on the premises) I realised that the taste was better for knowing that someone had put some real care and passion as well as skill, to create this sensation I was feeling. Someone developed the process that resulted in something that looked pretty much like all the others but, when savoured, was an experience worth writing about.

And I’ve just discovered that this is why I like a good craft beer so much.