What makes a great pub? 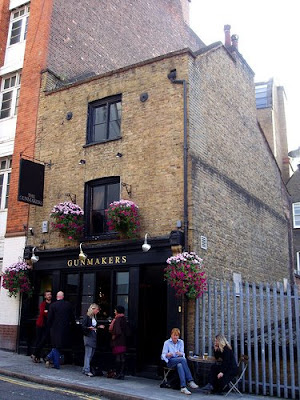 To finish off the school holidays I took the two older Pilsners ‘into town’ as my Nana would have said, for a visit to the State Library – yeah I know, pretty edumacational and not at all very beery – but sometimes you just go with something different. And something indoors if it is a rather chilly Melbourne morning.

After a tour and some activities we headed off in search of lunch –here’s where beer comes into it – and found ourselves inside Melbourne Central shopping complex. And I mean complex. The joint is a fair old rabbit warren if you’re not familiar with it. There’s only one place that didn’t look like a cheesy generic fast food outlet so that made the choice a bit easier. From the outside it just looks like one of those built-from-a-kit ‘Plastic McPaddy’s Original Pretend Irish Pub Co” kind of places but I could see beer taps and in we went.

As we sat waiting for lunch my mind wandered; what is it that makes a great pub? Because, while I couldn’t answer that, I COULD decide what DOESN’T make a great pub. And a lot of it I was looking at right now.

A stage area is fine. Having a velvet rope circling it – not. Especially when it doesn’t look like its had a run for a while and is currently a holding pen for a raffle prize. And the prize is a scooter.

Ye olde weighing machine – not. Who goes to a pub and then wants to weigh themselves? Is it a challenge to piss heads to get lagered up and see who can put on the most weight? Or who can drink the most and then LOSE the most weight the quickest?

Windows all around – good. Windows all around a pub that is completely INDOORS – not. I love to window sit and drink while I watch the passing parade, but grandma lugging shopping bags and a thousand teenagers queuing to buy movie tickets ... nuh.

And one of my favourites after years in the hospitality business – a quick run of the fingers under the table edge revealed a gallery of other people’s chewy. That one’s not an overall killer, it’s just a sign that management is not on top of the ’one percenters’.

Standard pub menu featuring the usual suspects – acceptable. A chicken parma that Sergei Bubka couldn’t jump over – nuh. I would rather one a quarter of the size that tasted like something.

Having said all that, we three had a great time and, really, I’m probably being a bit picky. It is just an interesting exercise to try to nail down just what it is that makes a pub NOT great!

Cheers
Prof. Pilsner
P.S. The picture above is a shot of what I imagine a great pub looks like :) It's just a snap of some random pub from somewhere;)
Posted by Beer Blokes at 11:56

Email ThisBlogThis!Share to TwitterShare to FacebookShare to Pinterest
Labels: pubs

I'm chuffed that you went into the State Library, hope the Young Lady Pilsners enjoyed it!

Just noting that you have used a smiley emoticon plus a winky emoticon both in the one post.

It's a short slide down the slippery slope towards Twatter, Professor!

Fiona,
There is as much chance of me Twattering as there is of Michael Jackson's world tour gong ahead ........... then again, I can imagine his Dad taking his coffin around the globe AND his fans queuing up and paying big cash to see it!

So, you just never know.

P.S. Some of your comments above seem to have come out all funny like heiroglyphics or something ... you might want John to check your PC for viruses.