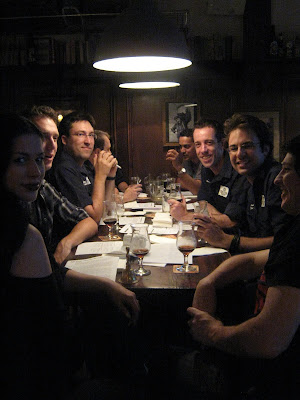 When you get out of your car at seven o’clock and the thermometer shows that it’s still 31c, you know it’s a good night to be drinking beer. 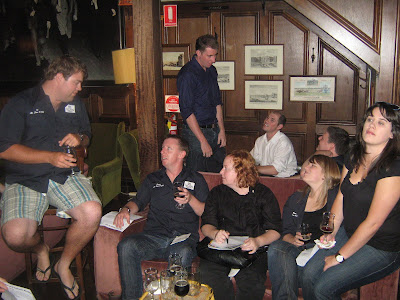 Bock Beers were on show this time around and despite the disappointment of the unavailability of a Doppellbock to complete the list, four very nice and very different beers were on offer. Starting with a traditional style Bock from the Hunter Beer Company in NSW with its sweetish, coffee-ish malt and easy finish we moved on to a classic offering from Rogue Ales in the form of their Dead Guy Ale, a Maibock with character, colour and plenty of layers to make you think; “Bock me, that’s good!” 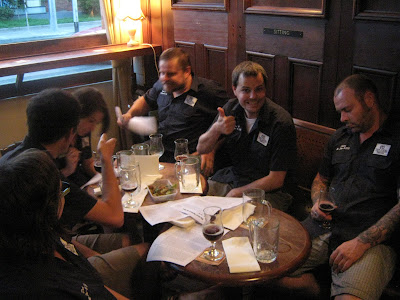 You can always count on an entry from Weihenstephaner for any beer event featuring German styles and their Vitus is no exception. Proving that Bocks can be light and pale and very lively with stacks of flavour from cloves to anise and baked bread this disappointed no one. No wonder the monks used this to live on during times of fasting. We finished with a Schneider Aventinus Weizen Eisbock. If, after the first three beers of the night you could even pronounce that one, you can tell me what it tasted like.

For this is not a beer review, or even an event review. If anything, it is just a way for me to try to convey just how it feels to be in a crowded noisy room with a great bunch of people all enjoying a shared sense of purpose. {Reach for chuck-bucket NOW} But seriously, it’s as much about the occasion, the experience, as it is about trying new beers of getting your beer-buzz on. Seeing new faces every month and recognising faces that just a couple of months ago were new and seeing so many regulars returning is a sign that beer appreciation in this town is in good hands looking forward. With 42 members now in the St Kilda Chapter, you’d have to think that these nights will continue to grow. 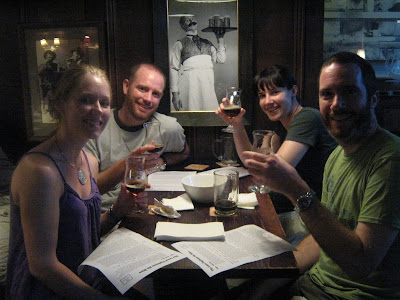 How they’ll all fit in I’m not sure.

What I can be sure of is that it will remain a social evening with lots of very nice beer thrown in. And some trivia. Speaking of which, the latest attempt in a long line of attempts to knobble the champions has led to an unexpected sub-competition. You see, points – bonus points – are awarded for the funniest team names created. So, even if you happen to ace the quiz and, let’s just say as an example, that you equal the previous best ever highest score - you can still get beat! Which is a good thing and I’m not at all bitter.

When you have ‘Bock’ as the beer theme, then choosing a funny name using the word Bock is a bit like shooting fish in a barrel but some of the better ones included Show Us Your Bock, Shandy is a Soft Bock and ... another one that was quite funny but which I can’t remember now but was good enough to win ten free beers. But my personal favourite came from the boys and girls on the comfy couches who came up with ‘Rock Out with your Bock Out’. Classic. Can’t wait to see where this trend takes us in coming Ale Stars evenings.

Totally unrelated things in answer to questions and comments I received on the night but which won’t be very interesting reading if you weren’t there.

Bron – No, boys don’t really appreciate it if you phone them up ‘just to say hello’ when you’re hammered and they haven’t been drinking.
Anton – yeah, you can enter yourself twice in the tipping comp but I’ll still whoop ya.
Bron – Just as the eyes are the window to the soul, so is the gut the answering machine for the heart. Check your messages; you’ll know what to do.
Big Kelv – when I don’t have to drive to Ale Stars I WILL definitely let you buy me a beer. My decision to politely decline on Tuesday was justified by the very nice Police Officer who breath-tested me on the way home and laughed when I answered her ‘Have you been drinking tonight, sir?’ with ‘I’ve been to a beer tasting called Ale Stars, actually’. Hmmm, have a nice night, sir.

A good mate of mine who homebrews had a particular brew that was stronger than usual and he declared that when he happened to imbibe it, it made him "see through time".

I think that is equally applicable to the Schneider Aventinus Weizen Eisbock.

I'd have given this review of Ale Stars a bonus point, had you included the word "Phenolic".

The word is that this was the messiest Ale Stars yet. The staff who were sober have reported that EVERYONE appeared to be a little the worse for wear. Presonally I was hurting the next day pretty bad.

If it doesn't hurt the next day then you weren't trying hard enough...