A Hopping we will go! 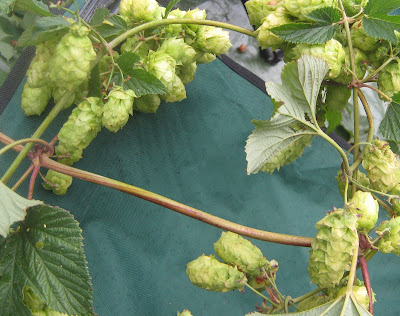 It was like my favourite scene from The Blues Brothers. Sitting outside The Local Taphouse in St Kilda in a 96 Holden Commodore wagon.

We got a brand new windscreen, two folding chairs, a full tank, a bleary-eyed Scotsman, long-sleeved shirts, a deaf guy and his brother. There are hops to be picked, it’s 84.7 kms to Red Hill and we’re wearing sunglasses.


There are very few brewers in this country who are able to grow their own hops. Hops are harvested in March each year and, while the process is fairly straightforward, it is pretty labour intensive. If you have a small crop, you harvest by hand and, if you don’t want it to take a week, you invite friends over for a feed and a beer. The windows of opportunity here are so small that this was an experience to jump at.

We joined twenty other like-minded souls on a crisp Melbourne Autumn morning and prepared ourselves for an intensive and exhausting technical demonstration and instruction before being let loose on the leafy product. David Golding, head brewer and proprietor of Red Hill Brewery spent the next twelve seconds showing us how it’s done and we were on our own. 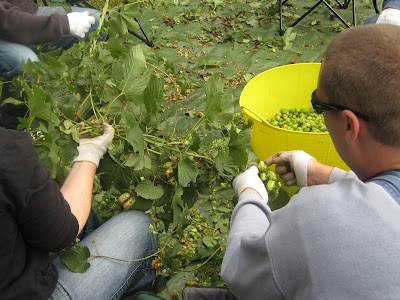 It’s actually not that difficult and within minutes we were all happily plucking away at the prepared bines and popping the cones into the buckets with ease. An almost eerie silence indicated that we all wanted to get a good handle on this caper before the day became a social event. Cue the beer! Morning tea at a hop harvest is a seriously civilised affair, even if the weather lives up to its reputation for quick changes in these parts. 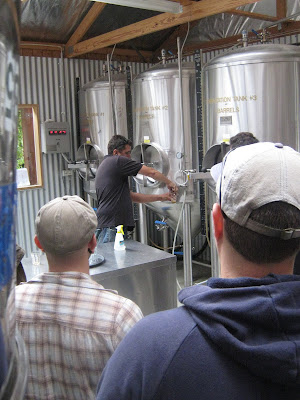 A brief shower moved morning tea forward and Dave kindly showed us through the brewery and allowed us the special treat of tasting a forthcoming limited release brew straight from the fermenter. The break also heralded the arrival of a couple of luminaries from The Beer World in Beer Matt (Matt Kirkegaard) and The Beer Diva (Kirrily Waldhorn) who, with film crew in tow, were preparing a beer-related TV program which will undoubtedly scoop the Logie for Best Beer Related TV Program if and when it gets off the ground. The Ale Stars certainly provided plenty of ‘promo-worthy’ material – although Shandy’s rambling may be well beyond the skills of even the finest subtitler. 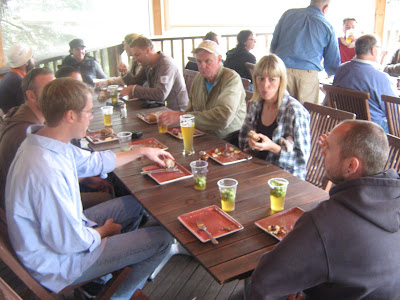 I seem to recall there was a little more hop picking before lunch and as the clouds parted and the weather became more settled, the pickin’ fingers became more nimble and the conversation became louder. The beer barrel, in a totally unconnected way, also became a lot emptier. And they call this ‘work’?

A Ploughman’s Lunch greeted us along with refills of Red Hill Golden Ale topped generously with fresh hop flowers. I tell you, a true hop-head has not lived until he’s had a long cold draught of ridiculously fresh beer with even ridiclious-er fresh hop flowers thrown on top. The more you drink, the further the aroma and flavour intensifies and yet it doesn’t get any more bitter. I know I rattle on about beer being as much as about the occasion as it is about anything else – but this was an occasion and then some!!

Some more beer (with added hops) followed lunch as did a rather small amount of hop picking and then it was time to pack up the Pilsnermobile and head back to ‘civilisation’. As I hit the hay some time around midnight, I could still ‘taste’ the sweet hop aroma i the back of my throat and, as I write this, my car still smells like a brewery. But in a very beery-car air freshner kind of way.

P.S. Thanks to David and Karen Golding and their team for their generous hospitality and for giving us the opportunity to contribute in a very ‘hands-on’ way to the craft beer industry!


And for those of you who don't have time to read the whole post, here's the summary of the day as I remember it. 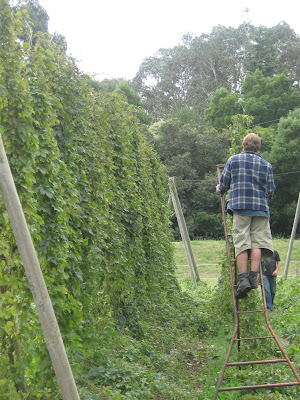 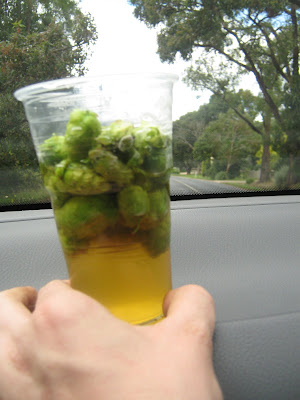 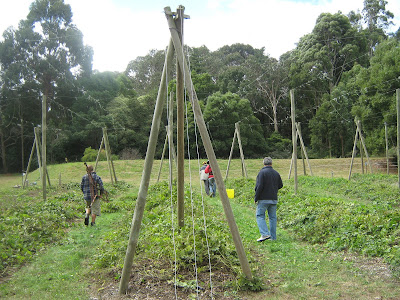 I have a hazy memory of a previous Ale Stars adventure which proclaimed Saison - relatively low alcohol beers - to be the traditional farmhouse ale of the crop pickers.

Did the Professor ask Dave whether Red Hill would consider brewing a Saison for the pickers next year?

Ask Shandy how you end up after five litres of anything while picking hops! There's a great pic of him (on the Taphouse site) where he appears to be holding a bine trying to work out which way is 'up'.

I'm sure Dave is listening and if anyone can brew a decent saison I'm sure it would be him. Not so sure he needs to give the 'workers' anything that is any more easy drinking, though! He might end up with ten barrels full of stalks and leaves!

I hate stupid work. Next year, fellas, next year.

Thanks Prof, a great day, glad you enjoyed. Easy work, hoppy beer, doesn't get much better. Did you all sleep well?
Thanks for organising a crew of beerlovers to come down.

Dave reckons he will never brew a saison! He's a purist about styles and the things that go in beer, we're not big fans of any beer with any sort of additional flavours, be they spices or fruit or mussels! And he doesn't like them!

Thanks again for coming down and for the post

I reckon we'd all be happy with a New World Traditional Red Hill Saison with no added flavourings - maybe just a version of the Golden Ale, brewed with a saison yeast and with a fresh hop flower stuffed into the bottle before capping!?