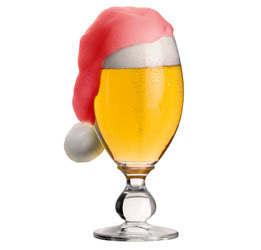 As the year draws to a close the time comes ‘round again for The Beer Blokes Christmas message.

And here it is.

As we did with Mo-vembeer, the Blokes are attempting to link their Chrissy tipples with the Chrissy theme. Not too difficult to achieve, wouldn’t you agree? There are so many beers out there that it shouldn’t be too tough to find a dozen or two that fit nicely with the Yuletide spirit. In case you are having trouble thinking some up, here are some starters. Some are so obvious they stick out like Warnie at a church picnic, others are so twisted they stick out like Murali’s chucking bowling arm.

Stella Artois was first brewed as a celebratory Christmas beer, with the Stella part meaning the Christmas star, and Artois after Sebastian Artois, the brewery founder. You could also sneak in a Heineken or Bintang or Spain’s Estrella Damm as these also share the use of the red Brewers Star. You could also rustle up a Carlton Sterling but don’t forget this is a light beer.

Or what about trying a Weihenstephaner this Christmas? If you are ready to drink beer engineered with real German brewing know-how and centuries of tradition, you could do a lot worse than a Kristallweissbier, a pilsner or a Hefeweissbier Dunkel. As I discussed in the Weihenstephaner post, the brewery has a strong Christmas link with good King Wenceslas bestowing the right to sell Weihenstephan beer as he looked out as the snow lay ‘round about, cool and crisp and even. These beers also go really well with BBQ meat and seafood so if you can’t enjoy one over Christmas, when can you?

Some of Australia’s craft brewers are putting out some terrific beers at the minute and many are designed as easy drinking, summer, barbie kinda beers. Some of the real blond beers around (as against the pretend blond beers which are low carb and blond only in that they are lighter in colour than a rich lager) are perfectly suited to the drinker who wants refreshment from the heat as well as a good shot of flavour and aroma which will not get lost in the food. Try a Murray’s Sassy Blond, a lightly carbonated, Belgian style pale ale, or a Grand Ridge Natural Blonde.

When it comes to Kiwi beers there are some crackers from across the ditch like Mac’s Hop Rocker Pilsner with a great kick in the finish that balances the warm malt well or a Monteith’s Radler which has a really interesting citrusy zesty tang due to the addition of lemon juice which makes it a great foil for charcoal-y grilled food or dishes with a bit of spice. It also shows up ‘lemony beers’ like Corona for what they are. And what they could be if only the manufacturers would add some beer to them.

If you are out and about and need to drive home, instead of going light or having just the two or three, why not try a mid-strength? Tasman have just put one out through Cole’s supermarkets. It’s made by Boag’s out of Launceston and you could do a lot worse for the price. VB mid is OK but seriously overpriced. Toohey’s Gold is a better tasting beer and more reasonably ticketed.

On a more serious note, something to be aware of this festive season is another of those cruel and sneaky hoaxes which is being perpetrated upon unsuspecting beer drinkers by a computer cockhead pretending to be the Beck’s Brewery. 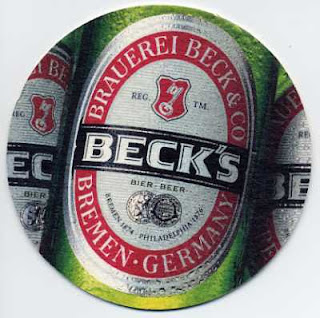 An e-mail congratulating the recipient on winning half a million Euro in a Beck’s New Year promotion is followed by a request to send personal details and an up front fee in order to collect. I reckon the fact that the Brauerei Beck’s Promotional Officer’s e-mail address is @yahoo.co.uk should probably have sent up a warning flare, but I guess some people see the $ signs; sorry, the € signs and get a bit blinded to the details. How dare these fraudsters hide behind beer to commit these heinous acts. If only they could use their vast computer geekiness for goodness instead of evil. How very dare they! 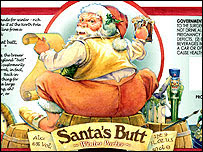 Speaking of dickheads, this time last year a beer named ‘Santa’s Butt’ was banned in some parts of the U.S. But not because of any fear of degrading Santa or the Christmas spirit but because it was deemed to be a risk of “promoting underage drinking”. What!?! Santa’s arse?! “MUMMY, I just saw Santa’s arse, can I please have a beer?” Spare me.

On a happier note, The Bluetongue Brewery in the Hunter Valley, NSW, has just been sold to Coca-Cola Amatil. I don’t mean this a happy thing because another Australian business has been sold off to the evil multi-national corporate conglomerate monster, but because it now means that there is a player in the market to rival the big two. At the moment about 90% of the Australian beer market is Foster’s or Lion Nathan with the remainder made up of all the little independents and craft brewers and the inclusion of CCA is a welcome bit of competition. CCA has a foothold in the market already, but only in distributing a couple of foreign brands. Hopefully a full scale price war will ensue. I only hope that the drinker is the winner.

So let’s all have a very merry and Beery Christmas and a safe and happy New Year. Take the time to appreciate friends, family and other assorted loved ones, and grasp the opportunity to sample a beer or two that you’ve never thought to try.

By the way, watch out for our bumper Christmas edition of Beer Blokes which, as always, will be chock-o-block with beery entertainment to get you through the holiday period. Look out for a huge review of the Mo-vembeer experience, a ripping piece on stubby caps, beer reviews a-plenty and a special lift out souvenir special thingy on the Beer Girl of the Year. All this and MORE. It’s our Christmas gift to you!!

Email ThisBlogThis!Share to TwitterShare to FacebookShare to Pinterest
Labels: Christmas;dickheads;

Professor Pilsner, you have excelled yourself once again - not only with the informative posts but also the superb Christmas BBQ. Thanks - what a fabulous spread!