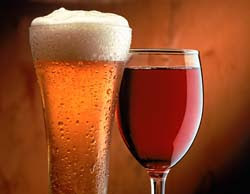 It has been said, more than once, by beer writers and winemakers alike that many winemakers are frustrated brewers. It is also said, by some that it’s the other way round. It is certainly true that a winemaker must be envious of the brewer as he sits patiently waiting to see if last years grape vintage has become a good profitable stock of desirable wine while the brewer and his customers are already finishing off the last of the most recent brew batch.

Being able to devise and write a recipe for a beer, procure the ingredients and brew and bottle a thousand odd litres of beer while the vines are still being pruned is a definite advantage to taking up beer brewing rather than winemaking. The brewer also has access to his malt, hops and yeast all year round, from home and abroad, while the winemaker’s ingredients are sitting out in his vineyard at the mercy of the Gods and subject to the vagaries of soil, weather and time. And maybe that’s the reason for the emergence of today’s’ topic.

The last two or three years have seen a new trend in Australian craft brewing led by none other than the ‘Wine Guys’. Perhaps due to the fact that the wine market here has seen devastating drought followed by a bulging glut of wine and subsequent fluctuations in sales and profits, and then more drought, the ‘Wineys’ are beginning to take a slice of the beer pie.

Brad Rogers from Matilda Bay Brewing Company via a couple of other reputable brewing endeavours is a qualified winemaker, as is Ben Kraus from Bridge Road Brewers in Beechworth. These guys can brew some seriously fine beers and beer drinkers around the country should give thanks that we have them and not the wine people. Brad has recently given us Crema, a coffee infused beer, Barking Duck, a Belgian Saison and Ben’s superbly ‘wine inspired’ Chevalier range which sells alongside the Beechworth standards has taken up residence in my fridge in past weeks in the form of the Bier De Garde.

In 2006 Lion Nathan released Knappstein Reserve Lager, a Bavarian style lager with some nice fruity aromas a warming mouthfeel and a nice strong bitterness to finish. It was made by Paul Smith, another beer/wine maker and designed to entice the drinker with wine-like characteristics. Australian malt and sauvin hops combine to produce a flavoursome, yet easy drinking lager.

Saltram, who produce Pepperjack from the world famous Barossa region of South Australia, has teamed up with canny brewmaster Brad Rogers to create a beer which is another step along the blurred line between beer and wine. A beautifully crafted beer with some rich, warm undertones, Pepperjack Handcrafted Ale actually contains a portion of the 2007 vintage Pepperjack Shiraz grape concentrate giving a fruitiness to the aroma and softening the harsher edges of the bitterness in the beer. While the wine flavours are deliciously interwoven into the overall body of the beer, it was a surprise to discover that this wine makes up a third of the fermentables in the beer. It also contains a portion of wheat malt which works well in ensuring that a nice bitterness and head retention is ensured.

So we may be approaching a cultural crossroads in the near future. One of the joys of being a beer lover is laughing at the snobbish and wankish-ly floral way in which aficionados of wine prattle on about their precious drop. If they all cross over to the dark side, who will be left to take the piss out of?