Sometimes things happen and you just break out a knowing grin or an appreciative smile and have another sip of whatever beer you happen to be enjoying at the time, content in the knowledge that you and the person you are sharing a drink with are speaking the same silent language.

It can be many different things which elicits this response but the thread which unites them all, regardless of content or context, is that agreement is almost immediate. You just get it. Right away and straight off the bat. You concur ... concurrently.

This is the story of two blokes sharing a beer in a pub. I will stop the story here for a bit so that you can go and get yourself a beer – you’re not driving a tram or operating heavy machinery, are you? – and then create your own mental picture of you and your mate in whatever is you favourite pub setting. Done? Good. Is it a nice old pub with character and charm and no pokie machines? Nice. Now concentrate on this story and not on the boobies of the girls on the table across the way.

There is a TV in the background; no sound, just an acceptable quality picture flickering slightly every time the bar staff open and close the beer fridges. The conversation is about everything and nothing and the beers are travelling down the Gullet Highway with ease and efficiency. Efficiency is also the theme of the conversation in general. Just chat. A bit of sport, some work talk and a general inquiry as to the health and wellbeing of the missus or the kids. Maybe a smattering of politics sneaks its way in; but only because the topic of beer and tax has popped up after paying for the third round. But that’s a whole other post for another time.

As you do when drinking beer in pubs, after every third or fourth sip your gaze tends to scan the room, you check out the crowd, look for any new arrivals in case there’s someone you know and glance carefully sideways to make sure those boobies are still as good as you remember them from before. Then one of you happens to catch a glimpse of the TV on the wall and see that the current show is an interview with Kyle Sandilands*. Without a pause or an even cursory glance to you mate, you finish your sip, put your glass down and utter two words – “Shit Bloke”. Enough said. You just get it. 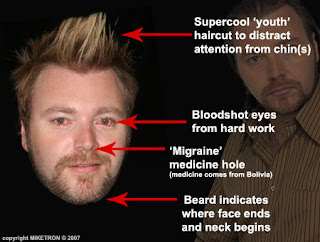 *Kyle Sandilands is a knob.

*for those who still don’t know, Kyle Sandilands (along with his on air radio partner Jackie O) is famous for being well known. Having contributed less than nothing to the overall quality of Australian radio or television for the past few years, he can today be found hosting Big Brother, playing the role of the cockhead judge on Australian Idol, using his role as a radio host to promote the alleged ‘talent ‘ of his girlfriend and pulling the wings off flies. Actually, that’s not entirely true – his girlfriend has no talent.

Viewers unfamiliar with this tools’ work can make this story more personal and understandable by inserting the name of any ‘celebrity’ twat whose self promotion is exceeded only by his ability to constantly deny that he is, in fact, the biggest knob-jockey to ever exhale breath that would be more deservedly used by either a parking inspector, civil liberties spokesperson, a Mc FatKidFactory franchisee or even a vegan.

My Beery thanks to Chris and The Bear for playing the lead roles in this beer story.
Posted by Beer Blokes at 10:30

It is with respect and sadness that I pay respect to a true Beer Bloke, Mr Michael Wright, commonly known as Pickles. This man loved his beer, too much was never enough, and my memories of him still holding a beer while standing and sleeping will linger in my mind for ever. Cheers Pix, and I hope a cold one or two were waiting for you in Bar Heaven.

Well said, Rob.
Am currently putting the finishing touches to a Pix Tribute Post. Any stories, real or exaggerrated are welcome.
PP

I've met Kyle. He's an even bigger knob in person. He's just like a teletubby except that he's in the screen instead of wearing one on his gut. His hair makes him look like one of those trolls, only uglier.