“What did you do during the war?” 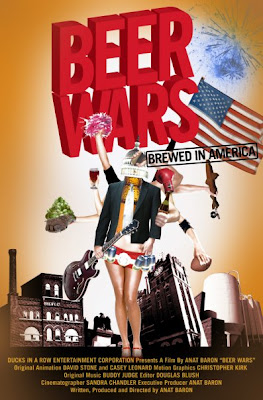 As a staunch advocate of Good Beer I often find myself in the company of average folk who love their beer but really don’t know how it’s made, who brews it and where it comes from. The conversation usually comes around to a discussion of the difference between ‘regular beer’ and ‘that boutique stuff’.

I often have to dispel the thinking that the ‘Big House’ and the ‘Little Guys’ make very similar beers but the big brewers can make them cheaper and send them further around the country faster. It just goes to show how the real story can be lost in a blaze of mass-media advertising and brand marketing.

This is one of many themes that arise and are explored in Beer Wars – The Movie. Made a few years ago now but still very relevant, creator Anat Baron set out to follow a few of the players in the US beer scene and see what story emerged. The film ends up shining a light on the system of distributing and selling beer once it leaves the brewery. While the system set out to ensure that evil monopolies would not arise it would appear that it has actually given them a huge free-kick.

Bridge Road Brewers founder, head brewer and chief bottle washer, Ben Kraus, has brought the movie to Australia and will screen it at The Local Taphouse in St Kilda on Tuesday September 6th and The Local Taphouse Darlinghurst on the 20th. Ben will be ably assisted in this venture by the voices of Radio Brews News, Matt Kirkegaard and my own good self. As well as introducing the movie we will also be moderating a brewer’s panel discussion after the movie to discuss the Australian beer scene and we will also be attempting to put a podcast together on the run – so be nice and no rude words.

To listen to the interview with Anat Baron, go here. To see the movie, reach down the back of the couch and find five bucks and turn up at The Taphouse at 7 for a 7.30pm sharp start. To get your opinions on Radio Brews News, say hello and buy me a beer and ill see what I can do.