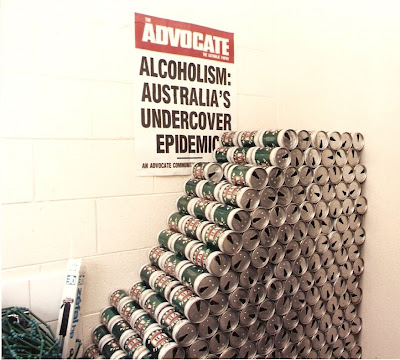 This is a post outlining the story and pictures that I presented as a Show & Tell segment at the last Ale Stars meeting at The Local Taphouse.

Reliving those care free days of my youth as I wrote the bit about making little motorbikes from stubby tops reminded me of what can arguably be considered the greatest ‘achievement’ of our youth.

My first venture from the nest came as I turned twenty and moved into a pokey flat with two mates. Central to the homes of most of our mates it became a bit of a meeting place for celebrations and before going out to the pub or to see a band play. Our lifestyle fairly mirrored ‘The Young Ones’ which had just arrived on our TVs particularly our none-too-frequent trips to the laundrette. And because we didn’t have a washing machine we had a large space in the laundry. And, as nature dictates, the space had to be filled.

One day, one of us laid out a few empty VB cans on the floor between the wall and the sink. And the collection began. Before long we had a veritable pyramid of cans growing ever taller and begging to be ‘utilised’. And then it came to me. We had begun the collection around the Australia Day long weekend so I thought it would be fitting that we keep collecting for an entire calendar year and then use the cans to some artistic means. And this is how ‘the Monument’ was born.

From that moment onwards we drank VB from cans. And nothing else. Looking back now I truly understand the concept of ‘suffering for your art’ though at the time I didn’t know there was a beer that was any better than VB. I can’t believe I just said that. Hope no one was listening just then.

By the following Australia Day weekend we had about 3,000 cans, four dozen rolls of heavy duty sticky tape which Rob had ‘liberated’ from the stationery cupboard of the State Bank of Victoria, a dozen mates, plenty of liquid inspiration – and a dream. Oh, and a small bit of open space in Rob’s folks backyard.

I drew up the plans for a two metre tall statue of Ned Kelly – Australia’s infamous folk hero/villain/ bushranger. Well, when I say I drew up plans I really mean that I got all the blokes who were not yet pissed and told them what the general idea was and then gave rolls of tape and boxes of cans to the others to assemble. Others were charged with assembling the torso while I put the finishing touches to Ned’s cardboard armour and any non-drinkers were in charge of cooking the barby and driving to the pub to replenish stocks.

By the end of the long weekend we stood before a towering monument to Australia’s bushranging heritage, creative recycling and irresponsible youth drinking. But at least we were off the streets. A magnificent 2.5m tall Ned Kelly proudly standing watch over the tomato patch. So proud were we of what we had achieved we called every media outlet in the state to see if any respectable outfit would be daft enough to publish the results of our work. And two of them said that they would. Well, one media outlet and the other not so ‘respectable’.

Our local community newspaper said they were not in the least bit interested as they didn’t really want to promote irresponsible youth drinking. Did they think that this was all done in a single weekend? Yeah, like we went up to the bottle shop, asked for “3,000 cans of Vic, thanks mate”, went home, drank the lot and then assembled Ned? And were still able to find the phone and call the paper?

The Sun newspaper (now the Melbourne Herald-Sun) sent out a reporter and a camera - and a promise. Because it had been a quiet long weekend and nothing particularly newsworthy had occurred, we were told that our little contribution to the arts would probably make the front page! Imagine that, we all thought - the front page! But fate was to intervene and, overnight, the Space Shuttle tragically disintegrated on take off, moving our efforts to page 4. We dedicated the next day to the astronauts lost and drank to them beneath the statue of Ned. 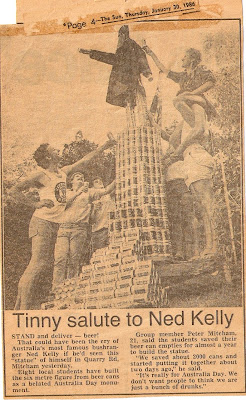 The other publication which showed great interest in our drinking/building/arty effort was People magazine – not the one like in the U.S. which is about celebrities and show biz gossip and top 100 hot bod comps – this is the 1980’s Aussie version with titty women, bad jokes, titty women, reviews of pubs, ads for x-ray glasses and titty women. We fit right in! Plus, they took and published a great photo, in colour!! 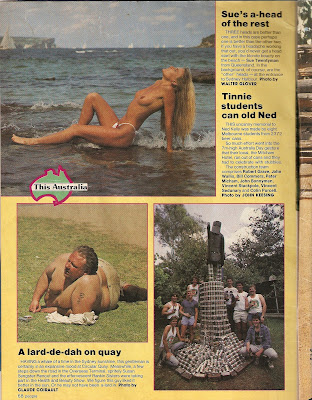 So there we were, immortalised in print, nestled between stories about Uri “The Spoon Bender” Geller and a crazy Brazilian who got his todger stuck in a swimming pool filter. Sharing the same page as a shirtless fat bloke who looks as though he ate ALL the pies and Sue’s Terrific Ta-Tas, for all our mates to be envious of. For those who have a local newsagent whose sales are a little slow, see if he still has a copy of the March 10, 1986 People magazine. You’ll notice from the date that this issue came out some two months after the event – must have been some great pics that kept us out for that long.

Nice, How much did you get for Ned when you took him to the recycling depot?

Sadly, he never got that far - at about 2cents a kilo we didn't think it was worth the effort. In the end he fell over onto Rob's Dad's tomato patch and he still hasn't forgotten that.

The most commonly reported undesirable effects of Valium injection are fatigue, drowsiness and muscle weakness which are dose-related.
[url=http://psbtrainer.com/]diazepam 5mg[/url]
Amnestic effects may be associated with inappropriate behavior.
order diazepam
There were rare cases of elevated transaminases and alkaline phosphatase as well as cases of jaundice reported.

Hello !.
You re, I guess , probably curious to know how one can make real money .
There is no need to invest much at first. You may begin earning with as small sum of money as 20-100 dollars.

AimTrust is what you need
The firm incorporates an offshore structure with advanced asset management technologies in production and delivery of pipes for oil and gas.

It is based in Panama with structures everywhere: In USA, Canada, Cyprus.
Do you want to become really rich in short time?
That`s your chance That`s what you desire!

I`m happy and lucky, I started to take up real money with the help of this company,
and I invite you to do the same. It`s all about how to choose a proper companion utilizes your funds in a right way - that`s it!.
I make 2G daily, and what I started with was a funny sum of 500 bucks!
It`s easy to get involved , just click this link http://wonehuza.envy.nu/gujiqehy.html
and go! Let`s take our chance together to become rich