47 people get off a bus and walk into a brewery 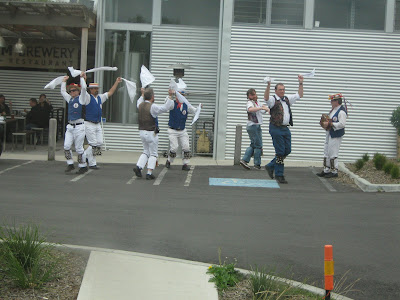 A picture perfect Melbourne Autumn day, one large coach (and driver), three beer-filled destinations ahead and 47 Ale Stars – is there a better way to spend a Saturday?

The Local Taphouse in St Kilda was the launching point for the first Ale Stars Road Trip and the Yarra Valley was the beneficiary of our company, our cash and our special brand of beery comedy. That is to say that the cash and the company came first, the comedy would emerge relative to the volume of beer we would consume.

Our first port of call was Coldstream Brewery for a guided tour and late morning samples of their fine small batch brews, but not before a rambling tour of Melbourne’s leafy inner Eastern suburbs before hitting the Eastern Freeway and allowing Steve to deliver the itinerary and the ‘Muck around and I’ll turn this bus right around and there’ll be no beer for anyone-don’t make me come down the back of the bus!’ talk.

As the closest thing to a ‘local’ it was up to me to point out to those around the various places of historical and cultural interest as we moved further out from the city. Loud gasps and hushed awe alike were heard as I directed attention to landmarks such as Eastland Shopping Centre, the Lilydale quarry and Car City. The majestic National Trust listed home of Dame Nellie Melba just outside Healesville was universally ignored.

Coldstream Brewery sits at the doorway to the Yarra Valley and, while from outside it looks as though it could have been a corner store in a previous life - and Shandy was surprised to find it ‘nestled amongst the servos and the sand n’ soil joint, rather than in some idyllic locale’ – it was certainly a warm and beery welcome that awaited.

Brewer Rod Williams led the halved group through the brewhouse while the other half parked themselves in the very homely bar and sampled the fruits of the brewer’s labour. Coldstream Lager and Bitter were followed by the seasonal Autumn Porter which was then transmogrified into the local version of a Black &Tan. Anybody who felt that the trip was in any way becoming like a school field trip with educational information and guided tours was soon relieved of this misgiving.

As we were about to re-board (re-embark?) the coach our little beery haven was filled to the brim with Morris Dancers – you know, hanky dancin’, noisy bells on their balls, silly boaters and antiquated English traditions? The Coldstream Cider was obviously of a very fine quality and the jolly folksters arrived en masse at the sound of the tapping of the coi-dair keg. They gave us a quick exhibition of their jaunty craft in the car park as our coach pulled out and some were heard to declare that the road trip was now really underway.

The short drive into Yarra Glen was made to feel even quicker as the now primed Ale Stars spent the time laughing, piss-taking, and providing rather well orchestrated choruses of the word ‘photo’ – or ‘phooor-tooor’ as Shandy would have it.

Hargreaves Hill Restaurant & Bar is housed in the old Colonial Bank building in Yarra Glen and despite losing the actual brewery in the Black Saturday bushfires at Steel’s Creek, Simon and his staff were able to keep us well refreshed with both his own stellar craft brews as well as craft brews from Red Hill and Temple breweries with a real treat – Chimay on draught.

The Ale Stars were then treated to a lunch fit for a King – or 47 reasonably well lubricated jokesters making fun of Shandy’s accent – and a procession of tasting glasses featuring all six tap beers. While opinion was divided on some brews (particularly those of us sipping what we were TOLD was a pilsner, but was confusingly a saison! D’OH!) The main interest lay in the noticeable difference in taste between a small sampler and a full size glass. The ratio of liquid dispersal to oxygenation regimes with a friction co-efficient factored in and the physical ratio of depth to width was commented on by nearly everybody. (Ding-Ding, tech foul)

We were fortunate to have a good hour and a half at Hargreaves Hill as this was roughly the amount of time our coach driver, Bubbly Bob, required to un-jam the bus from between the fence and the pedestrian bollard. Having 47 now very well lubricated Ale Stars offering advice and pissed giggles probably didn’t help, as it turned out. A few of us looked after him by shifting some temporary fencing. Well, it was temporary after we shifted it.

Our last stop before heading back to civilisation was the yet-to-be-opened White Rabbit Brewery in Healesville. This is a project by the Little Creatures people in WA and intends to produce just a single, ‘styleless’ beer as well as providing a nice place to stop and watch the brewing process while enjoying some fine beer. The point of difference here is the use of an open fermentation tank which is locked away in a sterile room and visible via a CCTV set up. You wouldn’t think that watching a TV showing a vat of vigorously overflowing foaming yeast would hold much interest but there were plenty of our number glued to the screen. Certainly more value in this show than in ten seasons of Big Brother.

Arguably the highlight of the road trip came next as we were fortunate enough to sample the test brew straight from the maturation tank – the first to try it after only the brewer. Can’t say you have that kind of opportunity too often.

As we loaded back onto the coach, happier but slower, plans were already being hatched for the next Ale Stars Road Trip. Steve at The Local Taphouse did a fantastic job of organising the itinerary and the details as well as managing the rather hefty tab left over due to the extra numbers attending and for all of this we are very grateful. 2009 – Re-building the Bush, One Beer at a Time – was a massive success and all agreed that a very fine and beery time was had by all.

...and we have the “phooor-tooors” to prove it.

Fantastic post! You remember a lot more of the day than I do (which may give creedence to the fact I was asleep on the bus on the way home!). Many laughs on the day - many more reading back over it. Great work!