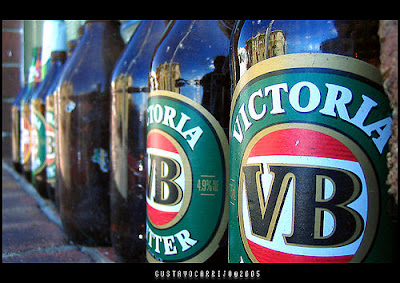 I got a call from Dr Lager the other day.

“I’m over here in Singapore. Whaddya reckon they charge you for a stubby of VB? In a restaurant? Normal size? Go on, have a guess! You won’t believe it!!”

Mrs Pilsner and the eldest Pilsner spent a few days in Singapore on the way back from a trip to Thailand and that was one of the first things they relayed back to me. What I hadn’t realised was that there is some kind of official ‘Don’t Drink Beer’ campaign going on in this island state that is very disturbing.

According to Dr Lager, and confirmed when he popped over and we scoured the net together for menus and price lists, even local draught beer is priced so as to deter the average drinker from being able to afford to get even a little bit tipsy.

I still can’t get over the fact that you can pay $12 for a VB. If I’m paying twelve bucks for VB – which I wouldn’t – I want to see him chaperoned by at least three of his little green labelled mates. I don’t know what’s worse, actually. The fact that someone is charging that much for VB, or the mere fact that VB is available in Singapore.

Fair dinkum, there oughta be a law.

VB is to Australians as Miller/Bud/Coors is to Americans. Standard garden-variety mass produced and mass consumed beer-flavoured beverage. Usually around $2.80 for a stubby (375ml bottle) or $3.40 draught pot (285ml). Singapore likes to keep people from getting drunk by pricing a good night out, well, out!

Thanks for the low-down on VB. I will have to see if I can find me some to review!