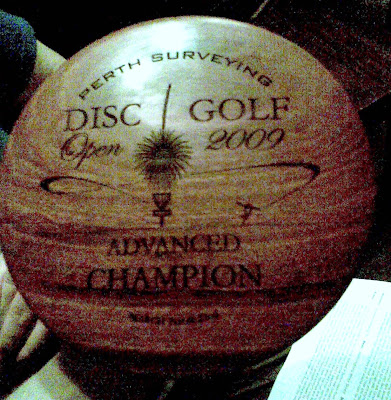 Ben managed to beat all comers in his division and at the same time keep down a fairly impressive quantity of the sponsor’s product, Barefoot Radler. Thinking back on this, I’m not sure which is the more noteworthy achievement.

Now, before you get all huffy and say that piffin’ a plastic flying disc around a public park is NOT an international sporting championship worthy of the distribution of international sporting championship winning trophies, hang on, it’s much more than that. Remember that these people compete against other like minded folk who also enjoy piffin’ a plastic flying disc around while drinking beer AT THE SAME TIME!! And they got to go all the way over to Perth to compete! Well, not the ones FROM Perth, obviously.

It seems to me that disc golf – which is pretty much like piffin’ a plastic flying disc around a public park but at the same time aiming at a certain spot on the ground – is just like real golf but with the benefit of (A) Not having to walk around quite as much, (B) Not having to dress up like a fat American tourist without the camera, and (C) You don’t have to hang around with people who like real golf. And, you can drink beer.

Well done, Ben, you have made your fellow Ale Stars proud.

Anyone who wants to learn more about piffin’ plastic discs around a public park, click here.

The worst thing to ever happen to disc golf was the introduction of the aerobie (disc golf's big bertha).

i just wish that the Disc Golf Rules Committee had not been lured by the massive financial incentives that new technology could bring to the game and had stayed true to the origins of the sport.

Parks that were once Par 5 parks are being "aerobied" in two piffs...

Even more insidious is the emergence of the Disc Golf Sledger - those who secret themselves among the adoring galleries and then throw out a well timed "You throw like a girl!" or, "Lost your dog?!" at the point of release.

Some think they are being clever by shouting remarks designed specifically to put off the disc golf professional and while it's true that a quick call of "Poo-Wrist" or "Custard Arm" can be amusing some take it too far.

The Australian cricket team has a lot to answer for.