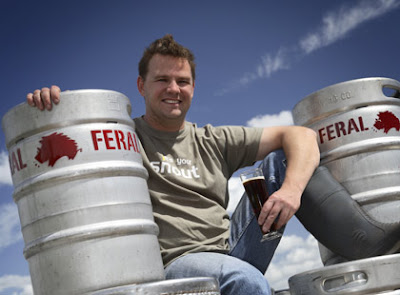 The Australian International Beer Awards has grown to become the second largest beer awards in the world and, while the results are often the subject of much discussion and debate, the quality of the entered beers remains the real focus.

With a judging panel that is a veritable ‘Who’s Who’ of beer writing and brewing, both commercial/multi-national and craft – and the number of entries from around the world growing each year the gold, silver and bronze medals seem almost interchangeable.

This year’s crop of champions was dominated by the Feral Brewing Company of Western Australia which took home a slab of medals as well as the title of Grand Champion (highest scoring exhibitor) Champion Small Brewery and Champion Hybrid Beer. Some great beers have been produced by this outfit and the Brother-in-law recently visited and sent me some SMS updates on the merits of their tasting paddles. I have only sampled a couple of their offerings and my notes suggest I was less than blown away by them in comparison to others. I will now go out and pick up some more – I guess that’s a side effect of the AIBA awards.

This year’s Premiers Trophy for best Victorian beer was won by a Victorian beer which was a nice thing. You see, last year the State’s boss gave the gong to Stella Artois – brewed in Victoria by Foster’s, but probably still really considered to be Belgian, you dumbarse – so perhaps someone had a quiet word to the new Premier before this round. By the way, I don’t mean to imply that the previous Premier was punted for this oversight, it was a little more complicated than that, but ... if I was running the show, you can bet that Government Ministers would be sacked on the spot for even lesser beer-related misdemeanours.

The winning beer was Mountain Goat’s Rapunzel - a strong Belgian blonde that is NOT Kim Clijsters. The Goat Guys first up crack at a Belgian beer was worthy of recognition and a deserved winner.

The Champion Lager and Champion Large Brewery were taken out by Imperial (Honduras) which surprised me a bit – not the least because I checked my tasting notes and thought their lager was less than ordinary, but what do I know – but also because it seems to be barely a lager. A quick check of reviews puts it everywhere from a light, unbittered refresher to the favourite all time beer of an Irish backpacker (because it was the cheapest) through to the Silver medal winner at last year’s World Beer Cup in the category of Australasian, Latin American or Tropical Style Light Lager. Having said that, it may be a completely different beer. There is an ‘Imperial’ from Costa Rica which keeps coming up in web searches as the same looking beer(?)

I’m still surprised ... not sure if I will be getting another of these to confirm my initial thoughts. And I can’t help thinking that there are plenty more lagers around that are far more worthy.

Best wheat beer went to Weihenstephan Dunkel and there is little to argue with on that one. Weihenstephan tends to snag a gong every year thus maintaining its reputation as one of Beer Bloke’s favourite brewers.

Champion Ale was the Feral Hop Hog from Western Australia’s Feral who also picked up the best Scotch/Barley Wine ensuring that local beers were well represented in the awards. Joining these were the Blackwood Valley Brewing Co in WA who collected best stout, Flying Horse Bar and Brewery (Vic) who won the porter category for their Dirty Angel and Sunshine Coast Brewery who scored for their reduced alcohol Summer Ale.