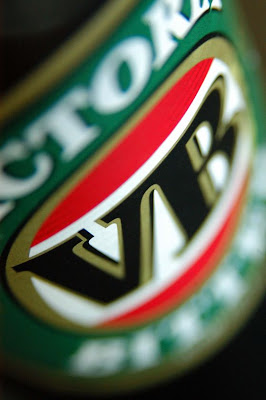 This heading caught my eye in the local Melbourne paper last week. I’m always a little sceptical of beer articles in the mainstream news because they always seem to fall into one of two categories – highlighting and over-exaggerating alcohol fuelled street violence or thinly disguised advertorial for one of the big breweries.

This article fits the MO of the latter and, in this case I think they’ve given a free hit to one of the big beer barons*. It claims to have ‘unearthed’ the most popular beers in Melbourne. And by ‘beers’, they mean Victoria Bitter – VB – and by ‘most popular’ they mean the stuff sold through Melbourne’s largest single beer-barn style retailer – Woolworth’s, which includes Dan Murphy’s cellars and a thousand hotel bottle shops.

Well, the only variance comes in when you look at an outlet in the CBD and one in Toorak (Melbourne’s most prestigious address). Here VB comes in at number five and four respectively. But the results for these two are nothing to be proud of either. In the CBD the alpha-beer is Corona. In Toorak it is Pure Blonde. I can understand VB at the ‘top’ because it is so widely available, has been drunk by everybody’s father, grandfather and great grandfather and is supported by the longest running series of ads in print and on radio and TV.

But Corona!?! The greatest practical joke ever played on a beer drinker and possibly the greatest supporter of the citrus fruit growing industry. Pure Blond!?! Pure marketing bullshit! It should have a warning on the label; “MAY CONTAIN TRACES OF BEER. MANUFACTURED IN FACTORIES WHERE BEER PRODUCTS ARE MADE” Any less taste of beer and you’d need to call it ... well, Corona.

Now, in case you think I’m becoming a beer snob (maybe the bulk of the population are just beer slobs??) I’m not, I’m just using these pages to lament the fact that award winning craft beers and imported offerings are never given the sort of full page spread that items, like this, of dubious merit or educational worth seem to get regularly. If you want to make up a full page ad for a big brewer, just say so.

Just don’t pour cheap beer down our backs and tell us it’s raining.

I live very close to the CBD and Corona is not my favourite beer.

I've just spent some time way out west and had the chance to sample a few brews that our west australian cousins are making.

My top three would be

I visited wineries and breweries whilst in Western Australia.
I might prefer wine to beer but, having had the opportunity to visit both, i think brewers are friendlier than people working at wineries.
i wonder if that is a product of their product...

on another topic, i was cleaning up at home and found a coastercard from a Bowral Brewery - Fishrock Brewery.
Do you know if they still exist?

Fish Rock is based in Mittagong, NSW and from my recollection are winemakers who have put together a couple of beers, Leatherjacket and Red Emperor. I hav had both a few years back and was not overly impressed. The leatherjacket tasted as if there was just a hint of fish in it!?