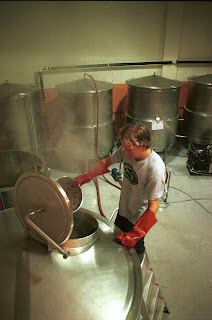 Brewing up a batch at the Mountain Goat brewery


Here at Beer Blokes we like beer. You’re probably the same yourself. We like drinking it and talking about it and we especially like brewing it. I also like writing about it because it gives me the opportunity to share my passion for all things beer with others.

I love brewing beer because I can dream that one day I can move the operation from the kitchen bench, to the shed, then on to an even bigger shed and, finally, to a small brewery with a sign on the door that says; “Beer Blokes.” I can even actually visualise the bottles jangling with their labels shining as they wobble off the line and into a convoy of waiting trucks.

This series will look at the way in which some of Australia’s most successful craft brewers turned their dreams into beery reality. There will be stories of luck and inspiration, of setbacks and perspiration and they will show how beer can take a dream, float it on a foamy stream of hope and lead it to brewing Nirvana. In many cases a large bank loan, tons of sweat and tears and the unwavering support of family and friends probably helped as well. 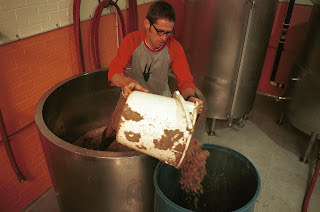 Mountain Goat brewery Pics from goatbeer.com.au
Many craft, or ‘boutique’ brewers as they were once called, have come and gone as the years have gone by. Some went belly up because their product was ahead of the tastes of the drinkers or because the costs involved in setting up and maintaining a brewery were beyond the beers marketable capacity. Others floundered due to quality control issues or because the hard slog just got to be too much. Others failed because the beer just wasn’t good enough.

But many survived because they found a niche or a smart way to get their brew noticed. Others utilised a kind of urban guerrilla campaign to create a demand for the stuff. Many just used their smarts and called in favours from family and mates and stuck it out through hard times and unexpected hiccups and then sat back and cracked a satisfied Ale or Lager when their luck changed.

Some brewers have even made a success of the gig due to the misfortune of others. This ‘Circle of Life’ is a poignant and yet uplifting fact of business where the brave or the fortunate feed off the carcass of the old, the weak or the unfortunate of the herd. Many a new brewer has picked up at auction, a complete and, in some sad cases, barely used brewing set up, the surrendered plant of someone, perhaps, just like them in many respects. Maybe starting out their dream on the foundations of men who once shared the very same dream is a sobering (pardon the pun) jolt and a reminder that to take your eyes off the prize might mean watching one day as the new kids on the block pick up YOUR gear for a song at another auction down the track.

Wether you call them micros, boutiques or craft brew operations these creative leaders of the ‘True Brew Traditions‘ should be admired and supported lest we allow the big multinationals to tell the next generation of drinkers that it is OK to see beer as a bland, pale golden, sparsely hopped and sugar enhanced sessional swill attached to slick and fluffy marketing slogans and TV ads. The craft brewers are the guardians of the craft, the guys who reassure us that beer can be so much more than status symbols for wankers who drink labels in places at which to ‘be seen’ and remind us that when you set out to offend nobody, you also rarely really please anybody, either.

I am collecting interesting facts and stories and myths surrounding some of our best and brightest craft brewers and will deliver them as soon as some of them have replied to my e-mails so that I don’t misquote them, misinterpret their philosophy or miss out on getting some free product should they feel that way inclined!

The first will be ready to post by July. Stay tuned