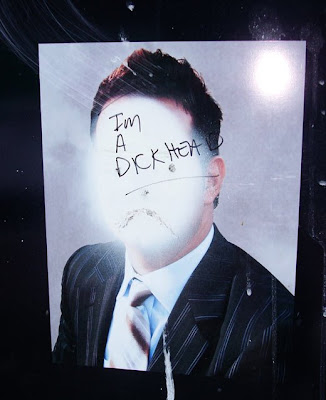 A few years back I was helping out a electrician mate, working as his ‘wire monkey’, running cables, drilling holes, wiring light fittings and stuff when we hit on an idea.

We were spending plenty of time on the roads going from one job to the next and we began to dismay at the generally poor attitude of so many drivers. Not the blatant hoon type behaviour or dangerous driving that is just scary to watch but the low-level, common garden variety dickhead behaviour that is, sadly, all too common. Tail-gating, lane-changing, discourteous ‘Yes, I DO think I’m the only car on the road’ kind of attitude.

We conceded that, while no single action was particularly worthy of wasting the time of the police or the courts, we reckoned that there had to be some way of curbing the attitude that it’s OK to drive like a total tool. My solution was ‘The Card’. A card for dickheads.

Any copper who spotted someone doing any or all of these low-level dickhead-y things could simply record the rego number, slow the car down, hand the driver his Card and be on his way. The Card would carry a small token fine and a warning – Learn Or Burn. Collect too many dickhead Cards and you lose your licence, cop a bigger fine or be forced to walk the main street of your capital city wearing a sandwich board proclaiming “I Am A Dickhead”. Simple.

We both conceded that this would all be just a pipe dream, but there was still just a glimmer of hope. Today, that hope, that dream became a glorious reality.

A court in Perth, Western Australia, has handed a $400 fine to a man for – get this – barking like a dog in his front yard!! How good is THAT!! The Magistrate said the man was ‘carrying on like an idiot’. Or, perhaps a dickhead!!

I think that The Card has just been born.

Hey Prof, that is such a great idea it makes my teeth hurt.

Nice one, the cop could even just note down your rego and the RTA could auto-charge a $15 dickhead tax to the registered E-Tag.

What about when it's the cops who are being dickheads though?

Let's make them 'self-deliverable'? Or better still, let'smake them available in limited numbers to the general public, like a citizen's arrest! And as in the cricket or the NFL - limited referrals to the ref!

Let's make them 'self-deliverable'? Or better still, let'smake them available in limited numbers to the general public, like a citizen's arrest! And as in the cricket or the NFL - limited referrals to the ref!

I think the fine is a silly idea. The general public should feel free to run up behind any card carrying dickhead and give him (let's face it, it is usually a him) a good thumb up the date

I'm with Vince, forget the fine. A kick in the nuts is much more pleasing.

Strike me purple, I didn't think I'd open the floodgates on random acts of violence primarily involving genitalia!! Dickheads or not, the plums and the jacksie are out of bounds, people!!

Having said that, let's see how the Card works out and if it doesn't work, then we go the nads, OK?